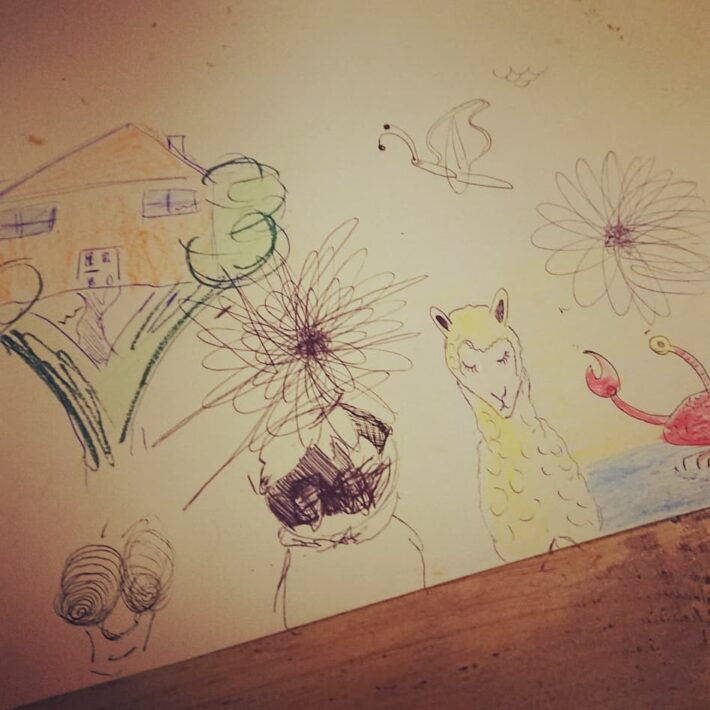 I have thought about this for a while and I have come to the conclusion that there is a good way and a bad way of describing Doodle Club; fortunately for us, the bad way is much shorter: Doodle Club is a monthly event, held at the top of a pub, where people can doodle, drink, eat, and socialise.

While this description is factually accurate it falls far short of encompassing the feeling of visiting Doodle Club, and so the good description is a little longer: Doodle Club is a fun little world, tucked away on the top floor of The Wave Maiden, where a small society of good-natured people are unified by the lure of low-pressure creativity. Attending can feel like stumbling upon some kind of lovely secret: one where you find yourself surrounded by friendly people, zero judgement, and a significant amount of felt-tip pens. Each month you are provided with a theme (founder Kendal James has told me that, in the seven years since the club started, a theme has never been repeated) and everyone sets to work on one long communal roll of paper. Scrolling through the paper allows you to peer back and revisit previous events, themes, and doodles.

When described in an entirely factual manner you may wonder why so many people enjoy attending, why so many people have become regulars, and why so many friendships have been created around the events: but it is, above all else, a nice thing to do. Having an area where you can mess around with felt tips and biros is nice, and having an opportunity to doodle can be a lovely form of relaxation (as this  hastily Googled article will attest.)

Dog Reporter caught up with founder Kendal James to find out how Doodle Club began:

Q. What made you want to start Doodle Club?

A. Doodle Club started back in October 2012 at the Registry, when it was a pub. I was volunteering in the local creative community at a comic book shop on Elm Grove who were approached by the pub manager at the time and asked if they’d like to have meetups for people who like to eat, drink and draw. I invited friends immediately.

4 people the first time, 5 the next, 10 the following week and before I knew it, we were adding tables together welcoming 12-27 people a time. I remember the time there was 27 people and I thought…. wow, this has become something bigger than expected.

A. The early sessions had a unique buzz about them because of the unfamiliarity of having so much ad hoc creativity in a pub. It was popular with all kinds of people, even then.

Q. What do you think keeps on drawing people back to Doodle Club?

A. The inherent inclusivity, the welcoming atmosphere. The feeling that anybody is welcome and it really doesn’t matter if you think you can or you can’t. Everybody can doodle!

Q. Do you think it’s important to provide spaces for people to feel comfortable being creative?

A. For me, being creative is the most honest form of self-expression. And it’s something you can do without even thinking. In this busy world, I think having places you can go to recognise and realise that is really important.

Q. What would you like to say to those people who don’t normally feel creative?

A. My favourite thing to say is a response to those who say “I want to, but I can’t draw”. I say: “I don’t believe that, but the pressure is off anyway. It’s called Doodle Club, not Drawing Club.”

Q. What would you like people to know about Doodle Club?

A. At Doodle Club, you can doodle, draw, colour, eat, drink, socialise, find inner peace, make friends – any and all of the above. Even if you don’t fancy doing that, you can just come and see what we’re all getting up to. The chances are, you won’t be able to resist joining in!

The next Doodle Club is here