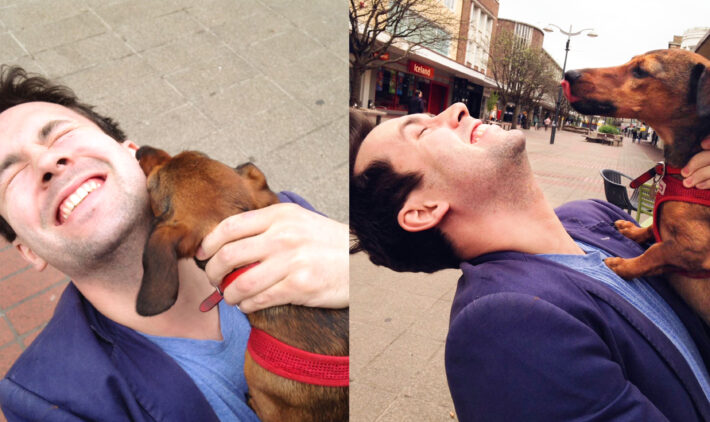 Dog Reporter catches up with Max Olesker, formerly of Portsmouth, to talk about the comedy duo’s new show

On Wednesday 29th Max and Iván are taking their latest Edinburgh Fringe show to the Guildhall. Max and Iván are known for their intricate, hilarious comedy plays as well as their comedy/wrestling show (called, unsurprisingly, The Wrestling) but this performance, unusually for the duo, is a retelling of real events: Max’s attempt to throw Iván the perfect bachelor party.

Max and Ivan’s first performance at the Edinburgh Fringe is something of a legend: the duo figuratively broke a leg by winning the Panel Comedy Award (formerly the Perrier Award) and literally broke a leg by Max breaking his leg (his ankle, to be exact). Now, with many more shows under their belts but thankfully no more broken ankles, the duo are taking Commitment around the UK.

If you haven’t seen one of Max and Iván’s performances before then there’s every chance that you’ve still seen them performing in various TV shows, heard them on the radio or on their new podcast: Fugitives; if you have been lucky enough to see them then you will know how funny, surprising, and often moving their performances can be. Dog Reporter catches up with Max to see what it’s like to perform back in your home town:

Q. How does it feel taking something you’ve toured across the UK back to Portsmouth?

A. It’s a terrifying joy to return to Portsmouth! A place of formative friendships, failures, flings, and a futon that I slept on from the ages of 14 to 17 (which has now thankfully been destroyed). The last time we performed at the Guildhall it was a fundraiser for Parkinson’s which we organised with my dad – due to a filming clash we turned up late to our own gig, and Tim Vine hosted the whole thing. This time around, for the avoidance of doubt, I must be clear; we’ll be at this show from start to finish, and Tim won’t be there. I’m so sorry.

Q. Does it feel different to be performing something based on real events?

A. Yep – in a good way! We’ve long resisted mining our own personal lives to create shows, but then the events of Ivan’s stag weekend took place, and there was really no other choice. We’ve always enjoyed telling stories in our shows – this one just happens to be true. It’s no less ridiculous than previous shows, though – more, if anything.

Q. Is there more pressure performing in front of people who knew you growing up?

A. Luckily, people who knew me growing up will have seen me in all manner of mortifying stages of my personal development, so the fear of a gig potentially not going well is nothing compared to the various levels of extreme embarrassment they’ll have seen me experience over the years. In the Rock Gardens near the Pyramids in 1998, for instance.

Q. Are there any Portsmouth-specific stories in your performance?

A. There certainly are – in fact there are Portsmouth-specific pictures! Ivan and I have raided our respective family photo albums, so there’s proof of the various ludicrous claims we make throughout the show.

And there are actually a few Portsmouth-specific stories related to people who I grew up with, which we’ve had to cut due to time constraints and legal threats.

Q. Is there anything you would like people to know about the show?

Want to see them on the 29th? Tickets can be bought here.

By the Dog Reporter