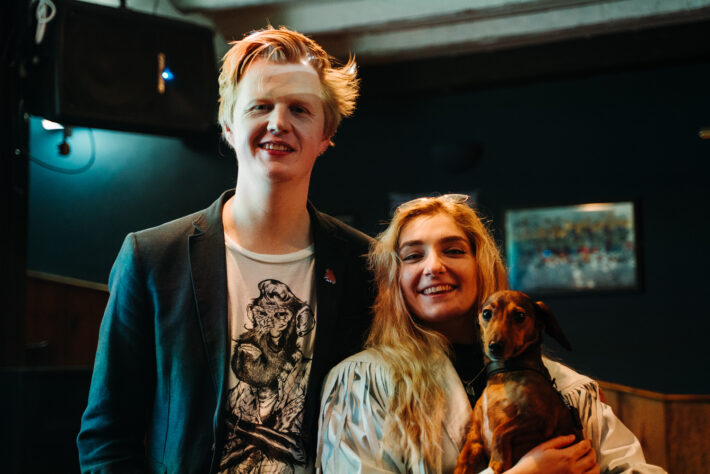 It’s Monday night and the Fat Fox is filled with people about to see the first-ever Short Movie Showcase: a new, quarterly celebration of short films. Over the course of the evening, we will see a curated selection from local and international creators: everything from an animated short about a tribe hunting sky-fish to a horror-comedy about torture. The event is being put on by Thomas Byrne (a recent graduate of Portsmouth University and member of film crew Familiar Stranger) and Bryony Copnall (Pastel Wasteland Films).

Short films may seem an unusual thing to champion, but there’s good thinking behind it: a short film will never be seen at a regular cinema and so has no compulsion to be commercially viable: as a result, it can be as strange, niche and expressive as the people behind it want. Short films are typically either passion projects or experiments in filmmaking, and either kind can take you on a surprising journey.

Films like those seen tonight can take a creator months of work (and maybe the product of years of thought) and yet after it has been made, there’s a real risk that it will never be seen again. Events like tonight allow creators to put their work in front of an audience, and lets members of the public see work that they would otherwise never know about.

Dog Reporter caught up with Thomas Byrne to talk about the event:

Q. How do you feel about the turnout tonight?

A. We were really happy with the turnout tonight. We’ve always known there is an audience for these films and we wanted to provide an opportunity to showcase them.

Q. Can you tell us about the films?

A. We’ve gone for quite a wide range of films this time as we work out what people enjoy most. Tonight our films range from an animated coming of age tale in a world ruled by a whale god to a reflection on a relationship gone wrong to all-out carnage with a couple of our own home-produced horrors.

Q. Are you planning on doing this again?

A. We’re definitely thinking ahead to our next event in a few month’s time. We’ll be posting more information on our social media channels as we piece it together – if you’re looking to be kept in the loop, give them a follow!

Q. What would you like people to know about this event?

A. There are a lot of incredible film events and opportunities in Portsmouth and we’re keen to be contributing to them. Our Showcase event came hot off the heels of the first Pastel Wasteland Film Festival which we held at the No.6 Cinema in November and next month Trash Arts are hosting the Reel Indies Film Festival at the Wedgewood Rooms. As it is, you’re never more than a few months away from an incredible, accessible chance to experience films that you’re not going to see at the local vue.

Q. Do you think it’s important for people to be able to see independent films?

The technology available for filmmakers these days is incredible – resources are becoming more affordable and accessible. More films than ever are being made and Portsmouth is a clear example of that. But if the way films are being made is changing, then the way these films are shown has to change too. We want to put these films out there and help them find the audiences that’ll love them.

Want to go to the next event or have a film you’d like to put in front of people? Thomas Byrne or Bryony Copnall can both be found on Twitter.