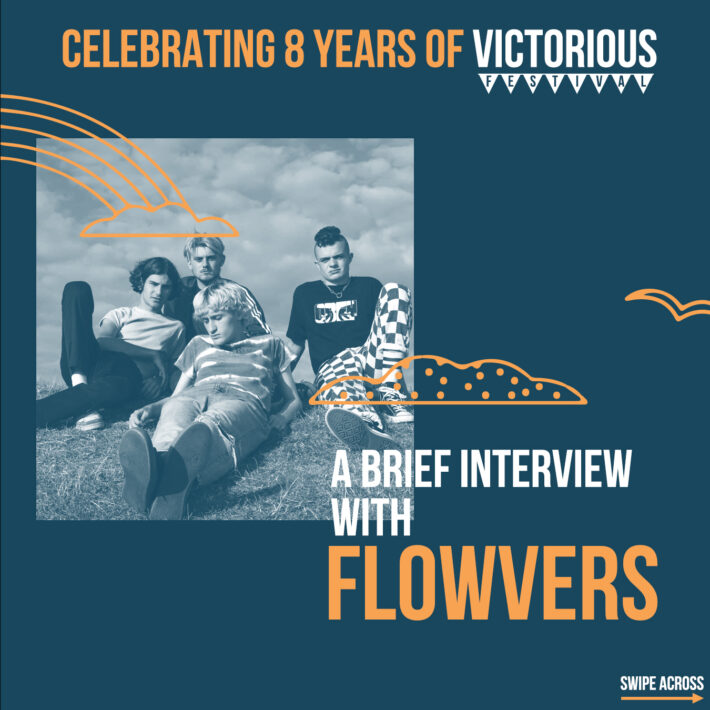 For our last day of interviews we wanted to catch up with Flowvers and Hallan, both great bands. Its been so good to highlight local talent and share with you their thoughts and memories of Victorious. Please look out on my Instagram stories for an Insta takeover by Flowvers!

Enjoy the rest of your wknd and hope you are all enjoying the playlist on Spotify.

FLOWVERS are a 4-piece Indie/Pop band from Portsmouth. Formed in 2016 these four friends draw inspiration from the 80’s and 90’s, with their love of The Cure and The Stone Roses they have created a great sound that has originality.

So many good songs to choose from but my favourite THROWAWAY GENERATION feels like a classic already. Keep looking out for more news as they are going to be even bigger in 2021.

It’s clear that Victorious has grown into a massive event in the local and UK calendar. There’s a buzz about the city and everyone and their dog goes from Pompey and further a-field. There has definitely been some influence that the festival has had on us. Playing the Seaside stage last year gave us an insight and experience to the festivals we were hoping to play this year and we’re grateful to this city for opening us up to a valuable and loyal audience.

This year we were booked for The Seaside Stage. It’s probably the stage with the best view at the festival. It sits behind a grassy hill that spectators like to listen from and is opposite the sea. The views on a late August evening are remarkable even on a normal day, so last year when we were on stage watching it all it did get slightly overwhelming. I do remember taking a moment to watch the Isle of Wight ferry go by in between one of our songs.

As a four we don’t ever get a lot of downtime together. When we’re on tour we’re always under some sort of time pressure and there’s never a moment to relax. So spending a weekend at Victorious enjoying music on our doorstep and getting to play at the end topped it off. We all saw New Order together which was a different class – every year the line-up gets better and it’s great to see a better quality of acts catering to all types of listeners even if it does mean having a few Lewis Capaldi fans knocking about.

Hallan has been quoted as being one of the best post-punk bands to come out of Portsmouth by Nikki from Mix It All Up which you can read about here.

Having only formed in 2018 with inspiration coming from The Smiths they have gone from strength to strength. They have just signed a record deal and have a new single out MODERN ENGLAND which has been played on Radio 1’s BBC Introducing. All this has happened through lockdown which proves great musicians can still create amazing things in a year of devastation in the music industry.

Victorious is always a great time for Portsmouth. It’s not often you get big names coming through the city so it’s nice to be able to catch trendy touring bands on your doorstep. We’d been meaning to catch New Order for ages so to be able to stroll down to the common and see a band of their caliber was brilliant. It’s always a fun time to meet up with other local bands at the festival and catch each other’s sets too.

We had a very bizarre experience last year playing the King’s Theatre stage. We didn’t know much about it until we turned up and saw all these hay bales out front facing the stage. We were sandwiched in between a DJ and theatre performance so that was a strange one. I don’t think the audience at that stage were particularly prepared for us to show up but they seemed to like it. We had a lot of fun that weekend and actually played on both Saturday and Sunday.

We were waiting backstage to play on the Saturday and realised we were sharing the green room with Boyzone’s very own Shane Lynch (Google also tells me he’s a professional drift driving extraordinaire – news to me). Our drummer Adam actually had a chat with him but about what I’m not exactly certain. If things weren’t weird already we turned up on the Sunday and shared our backstage area with a Freddie Mercury impersonator. He was a sound guy and he let us take photos with him before he opened up the stage before us. Never thought we’d have Freddie open for us but that’s why Victorious is great!

A massive thanks to Nikki from Mix IT All UP for the photos in this project.

By Louise O’Brien and Ella Ash