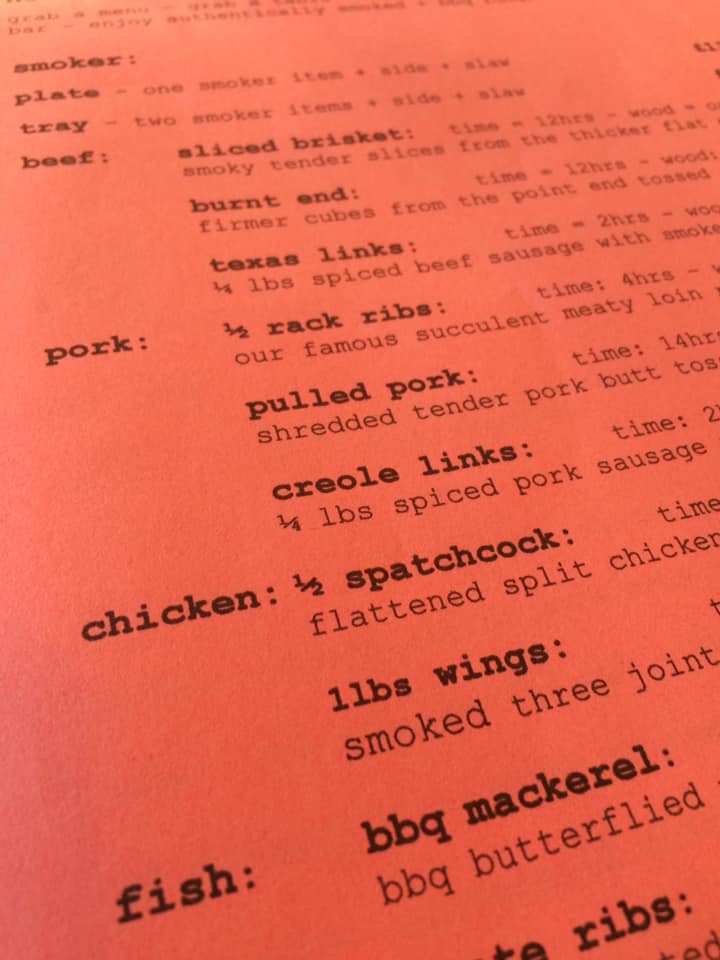 What’s new at the King Street Tavern? Well the 18th-century pub that is famous for being a genuine smokehouse and passionate about bringing smoked, BBQ meats to the heart of Southsea, mixed with a wide range of craft beers and ales is mixing things up a bit. If ribs are your thing you must go and try them here, but the new menu offers so much more now and I for one am really pleased!

The smoker menu offers a whole new concept to what the menu was before and now has the added option of fish which is always fresh and sourced locally.

With a choice of a plate with one smoker, or the tray which means you can add two smoker choices there is quite a lot of mouthwatering decisions to make. The sliced brisket and rack of ribs have always been a firm favourite, but new dishes such as the BBQ mackerel and skate ribs means you could be taking a while to decide on what to order. On the pre-launch night, the beef rib (which has the in-house seasoned rub and then smoked on the bone until tender) went down a storm.

If you are brave and hungry enough you could order the ‘Bears Grill’ which consists of 1/2 rack of ribs, sliced brisket, burnt end, wings, creole links (spiced sausage with smoked garlic), texas links, pulled pork, house fries, onion nest, hush puppies, slaw and pickle! This is one epic add to the menu and I think will be popular for sharing amongst friends!

Having always been a meat eater and loving the old menu, when I became vegan I was a bit gutted by the overpowering meat menu. All that I had loved I couldn’t really eat anymore and so I was excited to see a whole section for vegans and veggies now called the ‘Garden’. On the evening, I had the mixed beets and feta po’boy, all vegan. It came in a nice soft baguette with vegan mayo and balsamic and a slaw side. Other dishes include the 5 bean chilli, dirty fries which has chilli loaded on top, nachos and puppies and frank (crispy corn meal balls, a chopped vegan frank and a dipping sauce).

The new po’boy is a great addition and being only £10 means you can pop in on your way home from work or just as a little something when out with your friends and it won’t break the bank. With 6 dishes to choose from it consists of a creole sandwich plus a side of your choice and a slaw too. A new sauce has been created called the ‘mother sauce’ and this is tempting to dip your po’boy in to made with a blend of rich gravy, bbq sauce, red wine and spices.

My favourite by a long stretch has to be the addition of the new dish the ‘Poutine’ which comes in a cute cast iron pot and has fries with smoked pulled brisket, mother sauce, salted curd, soused red onion and crispy shallots. It is heartwarming, full of flavour and I think brings something quite special to the table. This is in the Graze part of the menu.

Now being a 4-page menu means there is so much to choose from with the added benefit of being an established pub and having an atmospheric vibe that’s relaxed and friendly means you can’t go wrong in here. Look out for special evenings planned over the Summer and BBQ nights which offer a buffet-style allowing you to eat as much as you want which is always a winner!