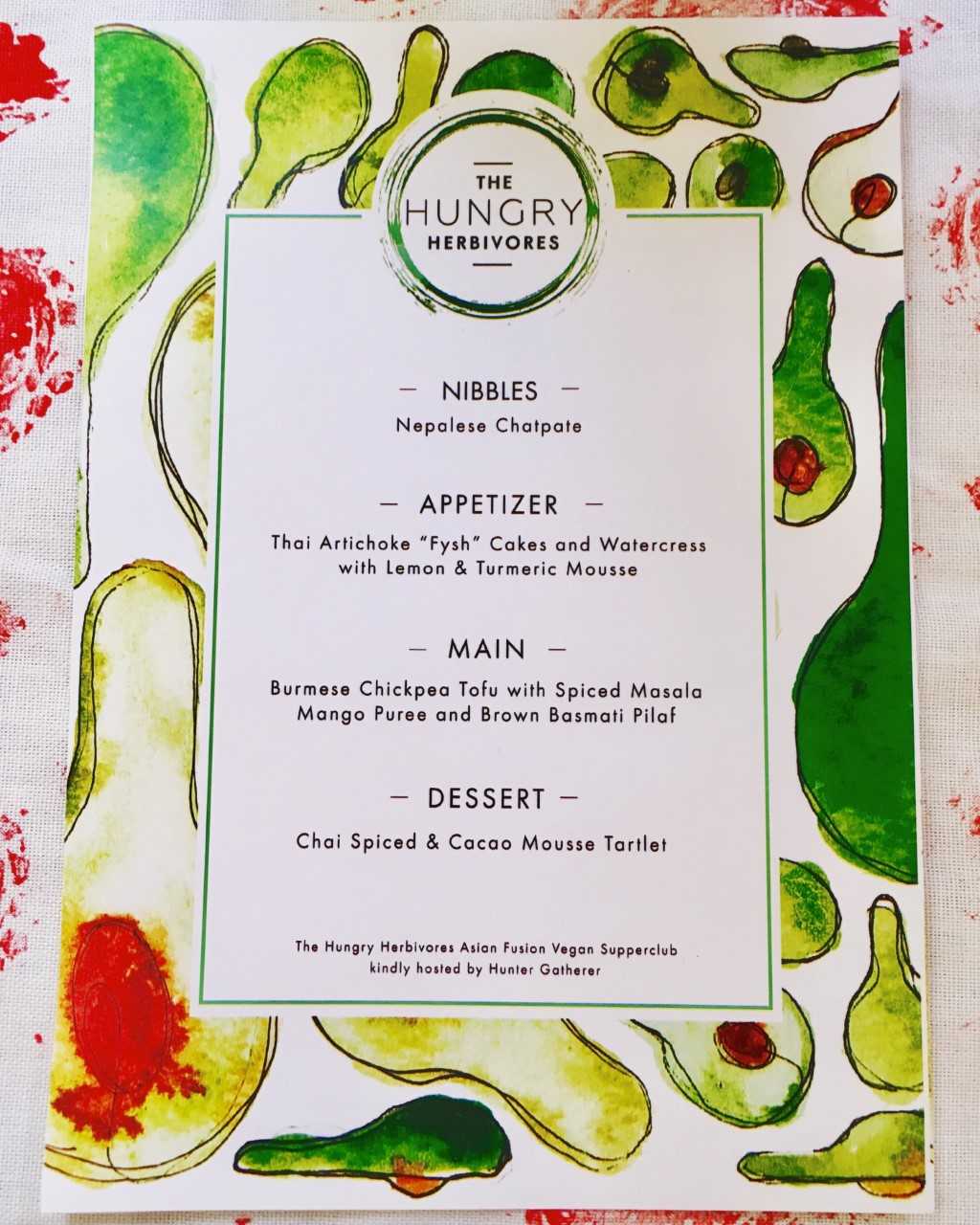 Last Saturday (19th May) I went to my first ever Supper Club. I’ve seen Supper Clubs advertised online for various things and fancied I’d like to go; a good way to meet people and bond over food where nobody gets fed up of me talking passionately about my quest to find the best pistachio ice cream (so far, it’s Moomaids of Zennor from Cornwall). I’ve been a fan of The Hungry Herbivores for a while and heard on the grapevine that Rosie was hoping to do a supper club so, when it went live, my friend C and I snapped up some tickets. Hunter-Gatherer hosted the supper club and approached The Hungry Herbivores about putting it on, a great team in my opinion and a lovely location.

We were greeted by a team of Rosie’s friends who were helping out for the evening as well as Hunter Gatherer’s owner who was running the bar. Led to the downstairs area it was cosy with an open kitchen; the ceiling decorated with vines and soft lighting, benches and chairs with cushions and a vibe that encouraged diners to talk to each other but enough space to feel separate if you wanted. Rosie and her team added their own touches by decorating with fresh flowers, candles and handmade table runners. 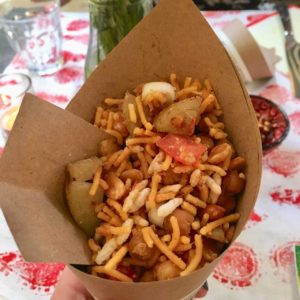 An appetiser was brought over and introduced, Nepalese Chatpate; a traditional snack from Nepal served in a paper cone and eaten with a cardboard “spoon”. A mixture of puffed rice, crispy noodles, peanuts, roasted chickpeas, tomato and potato; absolutely packed with flavour and texture. I could not stop eating this! My dinner companion C and I kept nibbling away at the chatpate after our starter and part way through the main course. The spice was a gentle heat that built over time and I loved finding the pieces of potato and refreshing tomato.

Next, the course I was a bit dubious of, Artichoke ‘Fysh’ Cakes. I’ve only had disappointing experiences with artichokes and was intrigued how much liked fish it would be. The cakes also contained sweetcorn and were really delicious! Crunchy on the outside, the artichoke was actually a lot like fish in texture with its softness and large flakes. Homemade flaxseed crackers were a welcome addition, again giving more texture. My favourite thing on the dish though was the lemon and turmeric mousse. It was so light, fresh and really zingy providing a lovely lift.

Still picking at our appetisers, the main course was a generous portion of Burmese Chickpea Tofu with masala-spiced mango Puree and brown rice pilaf. Did I mention that all the portions were very generous? Nobody was going home hungry which is always a good thing.

The tofu was really interesting and I’d have it again; made from chickpeas so it had a softer texture, not the bounce or spring that I generally don’t like. The puree was quite sweet but with a curried depth, not spicy, and decorated with dried mango. The pilaf was also sweet with goji berries and nuts, sprinkled with crushed up papadums for savoury texture. It could have easily been too sweet but little elements stopped it crossing over into dessert. 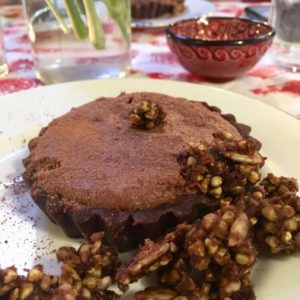 A nice break to digest the main course before dessert arrived; a Chai Spiced and Cacao mousse tartlet with raw granola. I’ve usually been really disappointed with vegan pastry and the base of this tartlet changed the game! Crumbly, chocolatey and a nice offset to the rich, rich, RICH moussey filling within. One of the waitresses told us it was made from aquafaba – the water in chickpeas which is also used to make vegan meringues: Clever eh? Cacao is such a wonderful, deep flavour and I don’t often cook with it myself, however, it worked very well with the chai spices (cardamom, ginger, peppercorn, cinnamon) and they balanced beautifully. The mousse was absolutely light as a feather and melted in the mouth making the raw granola with its slight chew and crunch (amaranth maybe?) was a great contrast.

We finished off with a gin and tonic whilst the team bustled around tidying up. My friend C and I both said how impressed we were with the atmosphere, presentation, portions and quality of cooking. It gave me a lot to think about and the inspiration to try and get into the kitchen and experiment more having now tried ingredients I was unsure about. The two of us left full and satisfied having had a lovely evening. Rosie and her team made all the diners feel welcome, explained each course and we got to know our table neighbours. A mixture of vegans, vegetarians and I think meat eaters were present, all excited to try an imaginative menu cooked and created by someone who loves what they’re doing.

If there’s another Hungry Herbivores supper club happening I can’t encourage you to get tickets any more than saying – IT WAS SO DELICIOUS YOU SHOULD GO!