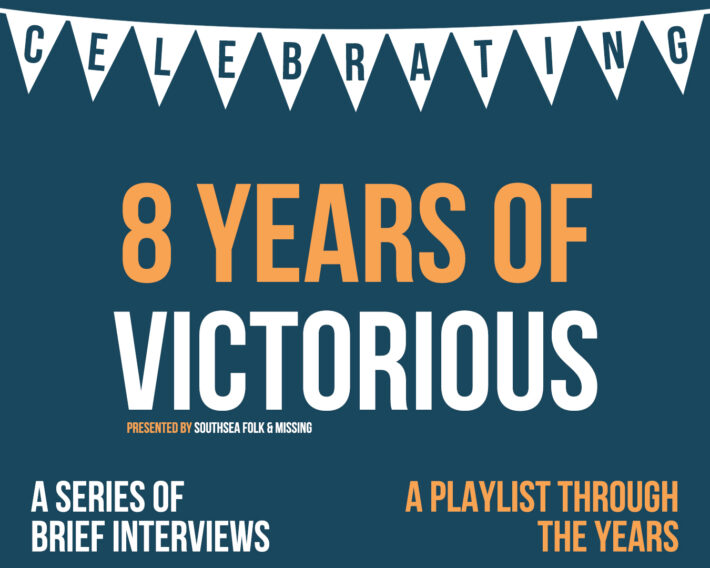 Highlighting Victorious this week has been a fab thing to do. Creating the playlist with Ella from Missing has brought back some great memories of sunshine down at the seafront.

Walking miles but not caring as loving trying to get to the next stage to see the band you thought you came to the festival for but then see loads of other artists on the way. Dropping by the Strong Island stand to listen to the acoustic set on your way to buy some sweets that are going to cost like £20 and you don’t care because they sell that fudge you always love! Queueing up for the glitter stand and seeing a food van you know you want to try because you are so hungry before heading to buy your pint of purple dark fruits because having walked past the Strongbow DJ music arena you realise you only ever drink Strongbow at this festival!

Oh the memories, but don’t despair if you are feeling blue this week as we have a cool playlist with just over 100 songs that really lift your soul. It has some greats in there and it also has a few local bands that should have been playing this wknd.

Here is the playlist

We wanted to interview a few local bands we love and here are the first two. Thanks to Nikki at Mix It All Up for the live photos that have been taken for this project. You can view more photos at www.mixitallup.com

From buying her first acoustic guitar when she was 12 and starting songwriting,  Megan Linford hit the music scene running from a young age and her skills as an artist have just kept growing.  Megan has an unbelievable talent that really reaches into the depths of your soul. A beautiful voice with elements of folk and gospel. We catch up with her to ask about memories of Victorious.

Victorious Festival will always make me super proud to be from Portsmouth. It’s an exciting weekend for all of us Pompey folk and it’s been so great to see it grow and grow each year! With the addition of the World Music Village over the last couple of years, Victorious has taken my heart even more. I love seeing the huge array of different cultures and genres that are celebrated across this part of the festival. Portsmouth has such an abundant and diverse creative community it’s wonderful to have a weekend we can all come together to celebrate it!

I feel very grateful to have been able to play at most years of Victorious Festival and have had a chance to play on a fair few of the stages. I loved the 2017 set with my band on the Real Ale Stage. The sun was setting as our set started at around 7pm and It was the most beautiful view. The acoustic stage is always a favourite of mine too, last year’s early afternoon set was busy and the perfect chilled out crowd for our music!

I have so many fond memories from over the years but I’ve got to say top 3 has to be joining the Southsea Alternative choir mid-set on the main stage last year. They always bring the party. Watching Brian Wilson in 2018 and Bloc Party’s set last year really blew me away, the musicianship was next level. A highlight of the weekend in 2019!

Me And The Moon

Me And The Moon are an indie-folk duo Tamara and Jonny who have supported one of my favourites, Lewis Watson amongst other greats! Having played quite a few major festivals in the UK we catch up with them to ask about Victorious.

ME AND THE MOON:

Victorious is actually the festival that holds the most meaning to us of all the festivals. Our first ever show as Me and The Moon was at Victorious 2015 which is crazy really. We’ve been lucky enough to have been invited back to play every year since. The Southsea music scene is such a special thing that you don’t get in every city and Victorious really is at the hub of that. Not many major festivals dedicate so many slots to local artists so were really lucky and grateful for their support.

2) Which stage did you/were you due to play on?

This year we were due to play on The Common Stage which was such a huge deal for us. We actually played there 2 years ago when there was an awful storm. We were huddled at the back in the corner away from the lake of rain that had formed on the stage and couldn’t use any power as it wasn’t safe. We ended up playing an impromptu acoustic set so this year we were really excited to be able to come back and play a proper set on the main stage. Oh well, third times a charm hey – maybe next year!

There are so many to choose from. The lineup is always so great and we get to see some of our favourite bands in our hometown. I would say a highlight for us was seeing Johnny Marr on the castle stage just as the sun was setting and we had a real magical festival moment. It’s such an amazing feeling to get to play at festivals such as Victorious alongside bands who have influenced us so much across the years.

By Louise O’Brien and Ella Ash