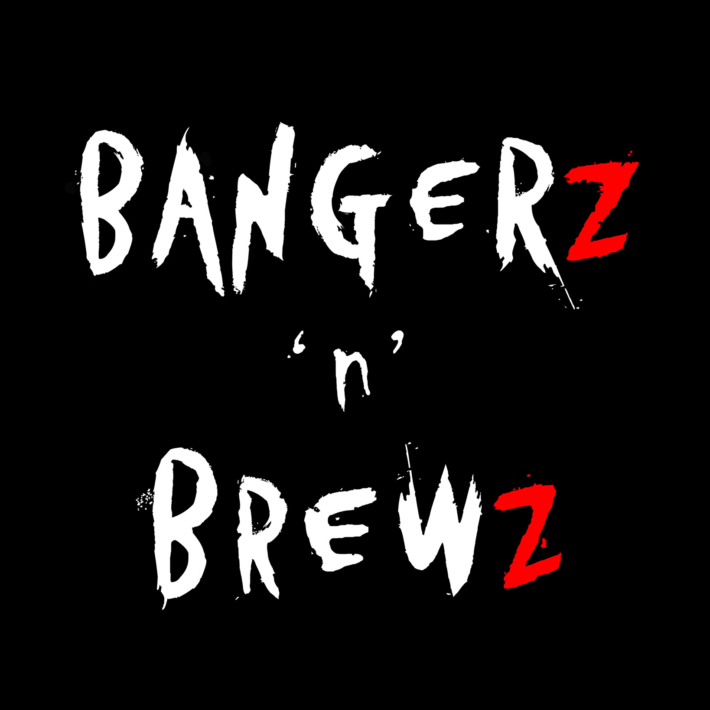 The walls are bare brick and industrial fittings. The tables and lockers are lit with neon and hanging light bulbs; local artwork is splashed across the walls and ceiling whilst the industrial sauce dispenser fits perfectly alongside the custom bar. It’s one of those places that oozes cool and feels like a backstreet New York joint you only know if you know … y’know?

Bangerz ‘n’ Brewz is one of the newest food joints in Southsea, born from family, passion and vision. I love coming here and took a few of my friends during their opening month for some impressive hot dogs. Our group was a mixture of vegetarians and carnivores and everybody was catered for – being spoilt for choice as a veggie is still overwhelming to me. I wanted to find out more, having been super impressed on every visit since, and arranged to sit down for a coffee with owner James one morning before they opened, later joined by The Banger Man and Mark from the kitchen team.

So how did a guy from Portsmouth and his family end up opening an American inspired hotdog place in Southsea? 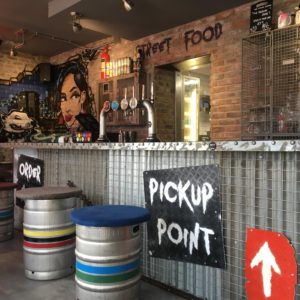 It started with James and his wife Echo heading to the USA for work for 2 years, specifically Miami. They fell in love with the fast-casual style of food synonymous with America that wasn’t happening in the UK at the time. Not greasy fast food but quality, fast-casual dining ; the space in-between a takeaway and a restaurant, where you can stay as long as you like over a few beers and keep ordering or just come in for a drink because it’s your local joint. James and Echo already had a passion for good food and craft beer, so seeing the success of these places in the US made them question why this wasn’t happening back at home? That and the infamous American hot-dog, something that hasn’t really reached our shores in the UK. James educated me on the hot dog and I had no idea there were so many different styles around America depending on where you were! This knowledge and inspiration would eventually lead to the Bangerz ‘n’ Brewz menu.

In 2016 they moved back to the UK and, with their experience in opening retail stores, friends asked them to come to London and help open up their restaurants. London is a hotspot for street food and different cuisines, everything foodie is on your doorstep in the Big Smoke. James and I spoke passionately about Street Feast, Dinerama, Bubble Dogs and a few other well-known foodie outlets and events. I could tell how genuinely into food he was and how this has translated into the business. 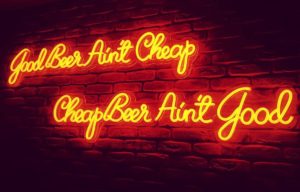 After a year or so in London James said he missed home, there’s nowhere like Portsmouth and he wanted to return to his family and the seaside. James, Echo, his brother and sister spent about a year designing Bangerz and Brewz and when I say everything is local, I mean EVERYTHING. The bricks were sourced locally and the cages on the walls were made from dockyard apprentices back in the 70s. The artists and tradesmen are from the area, Duane from Bear Metal Industries built their bar, lockers, custom sink and caged cupboards and street artist ‘Fark FK’ provided materials to help build the soda station that Duane also built.. The lights are from the King’s Theatre and everything else was sourced from Facebook and spruced up with some hard work and vision. James’ brother is an artist and decorated the bathroom – it’s very cool and a bit edgy! 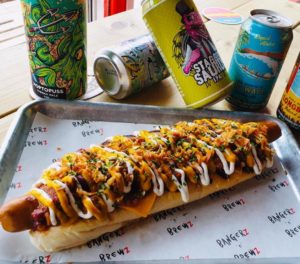 This passion for local extended to the menu and the custom dogs, buns and other ingredients are sourced as close to home as possible: With the exception of the German hot dogs coming from Germany and the USA franks coming from the USA but it’s authentic and I don’t think anyone can argue with that. Their inspiration for the menu comes from a mixture of James and Echo’s ideas mixed with The Banger Man’s practical experience of working in kitchens and catering. He’s worked in a variety of places around Portsmouth and it was a chance connection that put them in contact – I thought they’d been friends for years with how easy conversation flowed and the joint vision came across. The Banger Man also brought an experienced and close-knit crew with him to the kitchen; it can be a stressful environment so having a family back there makes things easier and I always think food tastes better when it’s made with love.

Each hot dog has its own dog; turkey, beef, classic pork, curry spiced, cheese centred etc… This is no run of the mill, slap some toppings on the same base and call it something new establishment. Flavours have been carefully thought about and made by Paul the butcher in Tangier’s Road, tests are run and recipes are created over time; there’s even a Secret Menu and a vegetarian/vegan menu. The V dog’s do have the same base but it’s the best I’ve ever had with great texture and savoury flavour, a perfect vehicle for the toppings nestled in the slightly chewy bun. Did I mention the bread is delivered fresh every morning by a local bakery? That’s how well thought out this place is.

Beer lovers are catered for with a strong range of craft options (James doesn’t sell beer he doesn’t like himself) including local breweries like Staggeringly Good. Brilliant custom cocktails are available (Nelson’s Ginger Wench anyone?) and wine fans are offered a rather tongue in cheek choice of red, white, pink or prosecco. Sides are abundant and who doesn’t love sides? The Cajun fries are so good, you must try them! Plain and loaded fries are available as well as olives, BBQ Baked Beans, Chilli con Carne or a Banger on a stick with dipping sauce.

The staff are incredibly friendly, the menu carefully considered and nothing is an afterthought. I’ve been quite a few times and haven’t had the same thing twice (except those Cajun Fries) and intend to pop in for a couple of drinks to enjoy the tunes when I next get the chance; the cocktails sound too good to resist.

Bangerz ‘n’ Brewz are here to stay and Southsea is all the better for it!  Follow them on Facebook and Instagram for irresistible pics and the latest news.