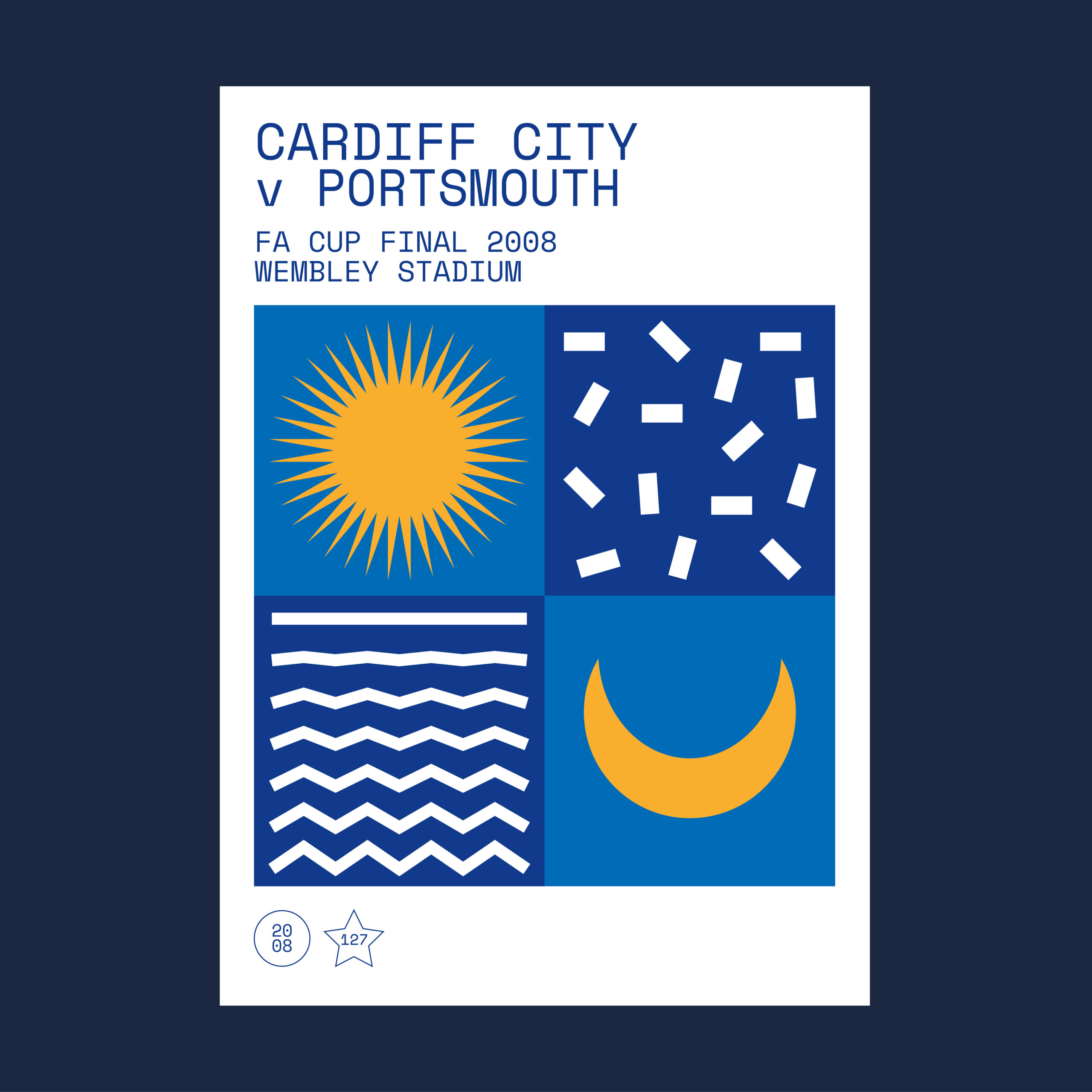 Mark and Andy From 12 Yards first met working for a graphic design company and found quite quickly they had two things in common; a love of football and a love for design.

Chatting about their love of Football Italia they both watched on a Saturday morning, (which aired at the time on Channel 4) you would honestly think they grew up in the same house! What transpired from these conversations though was bringing together a project that combined simple, abstract illustrations with a love of the game that they could share with fans.

Loving simplicity and breaking imagery down to its rawest form means when Mark and Andy add geometric shapes to their design, it gives their prints a playful sporting element. The duo’s love of football kits from times gone by has resulted in recreated tournaments – like Euro 96 in a striking format that can be cherished forever on your wall. Retired greats in football will always bring fond memories of the game, as well as remembering some of the iconic matches played. Mark and Andy are modern in their approach to the golden past of football but bring a healthy dose of nostalgia along with it. Fans will remember fondly where they were during a particular match, or why they loved a certain player.

Chatting to Mark I reminisced about the Euro 96 semi-finals. I was 24 at the time and the football fever across the nation was huge. You didn’t even have to be a massive football fan to get in the spirit of what was happening. I worked in a very large store in a shopping mall and we were allowed to close 30 minutes before the game (as approved by head office) to take the whole team to the pub and see how England would play out the next 90 minutes. We all know how the game ended but at the time it was epic! So to be able to own a piece of art that values that time in football history and presented in a clean design-led way means the print will look smart in any modern home and hold sentimental value.

What I love about the designs is not only how Mark and Andy have used their knowledge in design to create distinctive prints, but also how their love of football kits from the 80’s and 90’s shines through. Mark said that he was obsessed as a child with drawing all kits from across the leagues in the UK. Finding out that a rare kit from the 90’s he loved would set him back £500 really threw Mark. He added that the chances of people owning a real football kit from the 80’s and 90’s would be rare.
The solution?
From 12 Yards could create a print of that kit so you can still own a piece of football history!

Their latest design is the Cardiff City V Portsmouth FA Cup Final 2008 and is available to buy now. They also design many other matchday posters, so have a browse on their Social Media and website for those.

If there is a specific match you love and remember, then get in touch and have the boys draft something up for you!

As the Euro’s are not going to be played this year, and people who love football are really feeling the strain of not being able to go see their favourite team play, there is going to be a series of games played to lighten the mood and help you feel that your passion for football is not lost!

UEFA have a series of games you can watch here.

All of England’s five games from Euro 96 will be played from May please look out for this on ITV HUB and ITV 4 where you can relive the fever of the squad, the iconic team with the likes of Gazza, and Gary Lineker!

Check out From 12 Yards on their SM here