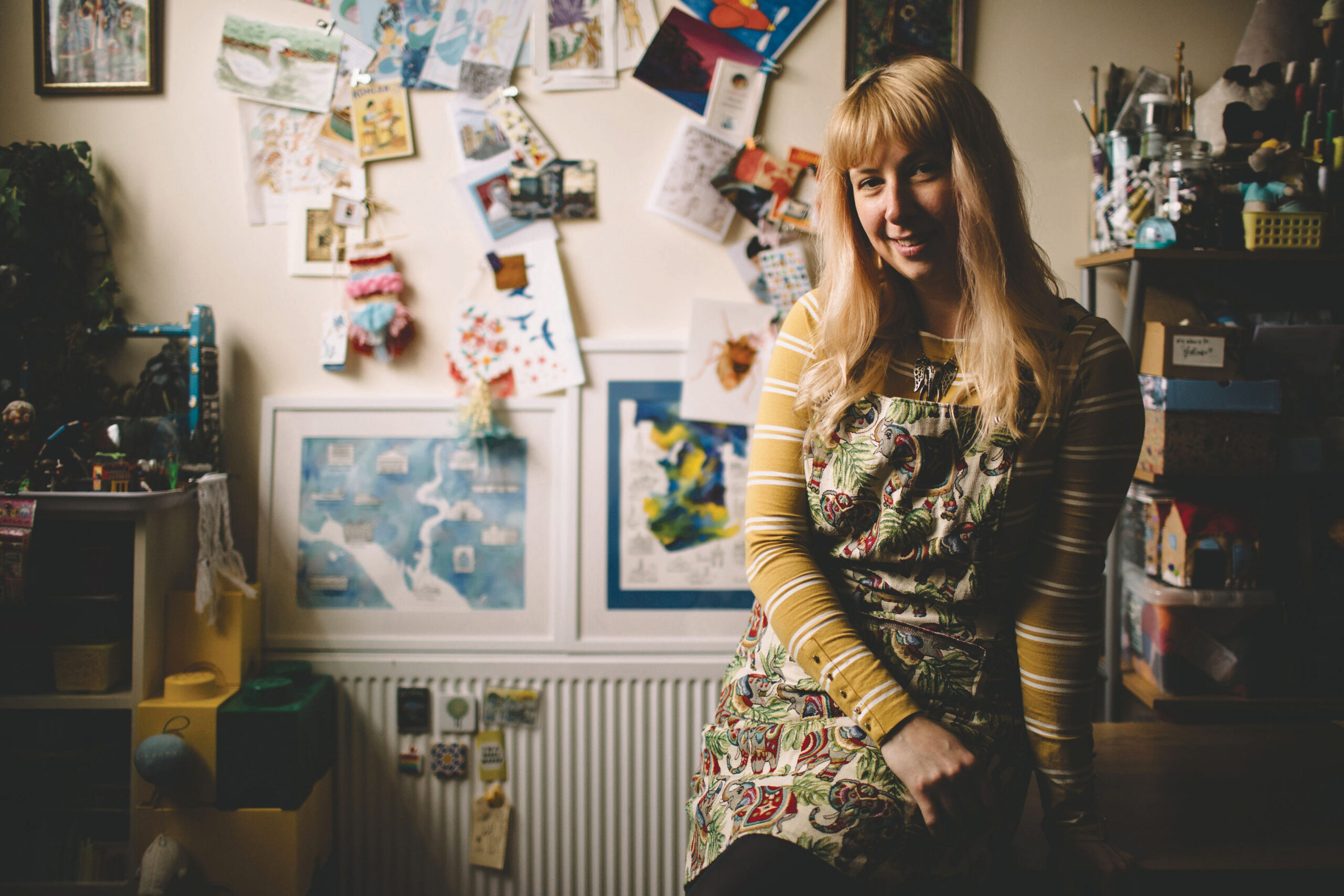 Traveling to Southsea for a day trip with my little boy, I ventured down to Hotwalls in Old Portsmouth and there, in the last studio was Kendal. A total whizz at Hama Beads, my son sat for an hour making his own Mario that he could take home and I never thought I would see Kendal again. Then we moved to Southsea and on visiting the Crafts in the Tower (back at the beginning of 2018) I saw Kendal again and discovered how much she offers to the creative scene in Southsea and Portsmouth.

Like many artists, Kendal took Art and Design at college which encourages young adults to explore a variety of disciplines from illustration, photography, printmaking, and fashion. It explains why Kendal is full of creativity and has a wide range of skills. Kendal then moved from Bristol to Portsmouth for university and, like many others, fell in love with all Portsmouth has to offer and decided to stay. She was studying interior design which nurtured her intricate line work through technical drawing. Another interest of hers is gaming and understanding how the design elements of the gaming industry work. This is where Kendal started her interest in Hama beads, creating pixel-like images of characters and video game elements  She found a home by moving in with the Fire Monkeys studio as a collaborative space. It meant Kendal could finally have a studio space for her many creative endeavours whilst sharing the financial load with others.

Being in a studio surrounded by other artists is how Kendal first developed the idea of the maps she has now become known for; producing something unique and personal with mass appeal so she could make some money whilst fulfilling her love of creating something special. Kendal produced cards that could be sold at a reasonable price but also offers commissions for watercolour originals that can be personalised to meet the client’s needs.

Moving into her own home studio at the end of 2017 allowed Kendal more time to produce her work and at the start of 2018, she decided to produce lots of mini maps and cards for Mother’s day. This proved to be a great success and her commission work for maps has grown ever since. Being a creative person that can sew and make her own dresses as well as draw, paint AND host Hama bead workshops shows this girl has no end of talent and she plays to each of her strengths and audiences with her wide array of skills.

As if she wasn’t busy enough, Kendal is involved in lots of creative events across the island! She runs the gaming club at Game Over once a month plus organises doodle club at the Wave Maiden. She also works for Paint Chill Co, a new venture that has people painting and drinking in cool venues across the city. Always one of the faces at Crafts in the Tower, Kendal enjoys meeting and greeting people whilst showing her work, alongside offering Hama bead classes during the afternoon (which is where my son always likes to go).

Kendal recently attended and was part of the Accessible Art Show in Southampton and sold quite a few of her watercolour map paintings. By offering a personalised piece, it means Kendal can draw and paint a map of anywhere in the world. One of her latest creations was to draw a map of Japan for a friend. Japan is an inspiring place for Kendal and she hopes to visit later on in the year. She plans on taking her paper, watercolour paints and pens with her as these materials travel easily and she can create with them anywhere in the world!

Having seen Kendal’s maps in person, I knew that the colours and style would be perfect for a vibrant Spring cover. Discussing the concept with her I discovered that Kendal is turning 30 this year and she wanted to commemorate it by adding 30 of her favourite places in Southsea and Portsmouth to the map. What a brilliant idea!

She said she could have added a lot more but wanted to keep the design spacious to really show off the intricate drawings of the landmarks and buildings we have around us. If you look carefully at the front cover you’ll spot Kendal’s love of Japan sneaking in via the stylised waves of the solent, the first time Kendal has added waves to one of her maps. I think the end result is fabulous!

Kendal loves creating personal pieces of art or design; whether that be with watercolour, fabric, Hama Beads, yarn or digitally. Having commissioned her myself to paint a watercolour map for my Auntie’s birthday of the county she lives in, I can appreciate how clever and easy (as the customer) it is to commission her. I placed my order, gave the landmarks I wanted to be included and the end result is so lovely I can’t wait to send it off to Ireland and hear my Aunt’s reaction to something so personal and bespoke! Kendal offers the watercolour maps in a variety of sizes, from A6 with one illustration for £10 to A3 with 10 drawings for £75. It means you can commission something truly unique whilst suiting your budget. With a general lead time of 1-2 weeks and a choice of which colours are used, you can make the tough decision of where you want Kendal to illustrate – your favourite holiday place? Where you live and love? Or somewhere you’ve maybe dreamed about visiting?

The piece of artwork designed for Southsea Folk is available to buy now from Kendal for £300 and is a lovely memorable piece to remind someone of Southsea and Portsmouth!

To find out more about Kendal’s maps and other work visit her Etsy shop here.