Last Thursday was the launch of Paint Chill Co; a new creative and social venture set up by local artists Penny and Jessa of Artypotz and ArtReleaseUK respectively. Their aim? To encourage creativity in a relaxed environment where you can escape the daily stresses of life, have a drink or two with friends and walk away with a picture you’ve painted. Sounds like a great mission to me! Some of the Southsea Folk team went along to the launch to get involved in this creative new business.

On arrival at The Liquorist, we went upstairs and were greeted with a glass of prosecco – a nice touch for the launch! The room was big and bright with plants hanging trendily in the windows, professionally set up with all the canvases, water, brushes and paint ready at each station. After a bit of mingling and chatting it was time to don our Paint Chill aprons and hear from the founders Jessa and Penny. We were told not to worry (some people were more nervous than others holding a paintbrush) and that the Paint Chill team had designed a variety of paintings that were easy to teach to all skill levels. Want to get creative with the design? Go ahead! And hey, if you don’t fancy painting what we’re painting? Don’t!

With everyone looking more at ease, they introduced our teacher for the evening – another Portsmouth artist called Kendal. Paint Chill Co has teamed up with two more local artists (Kendal and Hannah) and trained them up as instructors. I love that they’re encouraging local creatives to get involved and it adds a really nice variety in style with the paintings that they’re creating for classes. Each instructor has a unique approach and style, ranging from bold outlined pieces to more realistic looking as well as beautiful florals, where the paint is encouraged to run right down the canvas. 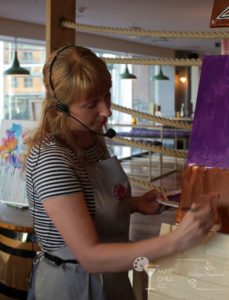 Kendal introduced herself, checked we could all hear and away we started with a bold wash of deep purple (or not if you were doing your own thing). The steps were broken down very simply and Kendal reminded us not to worry too much but just follow the steps as best as you can and enjoy the process. As a perfectionist, having no base sketch to work from was slightly outside my comfort zone but the atmosphere was very relaxed and non-judgemental so I soon settled in, chilled out and got my paint on. Starting with those big washes and just getting some colour going, coupled with clear instruction and a glass of prosecco meant everyone easily got over the fear of staring at a blank canvas.

We had two breaks to grab a drink, which also served as time to let the various layers of paint dry, and began adding the finishing touches to our masterpieces. We were all shocked at how quickly nearly two hours had flown by! Taking a look around the room there was such a variety of styles and even topics being painted, the majority choosing to follow Kendal and her Vino but some other beautiful paintings had emerged including flowers, variations on the wine topic and even a handsome whippet. The team were so supportive and always on hand with fresh paint, clean water and more tissue whilst the whole operation ran like clockwork. It was a nice touch to be able to see what everyone else in the class had created whilst we had a walk around at the end.

Paint Chill Co is hosting public events around Portsmouth, with plans to expand their reach along the South Coast in the not too distant future. The team are also available for private events such as team bonding and hen nights. Find out more by heading over to their website and keep an eye out on their Facebook and Instagram @paintchillco for the latest updates, as well as seeing what artwork you could be creating!