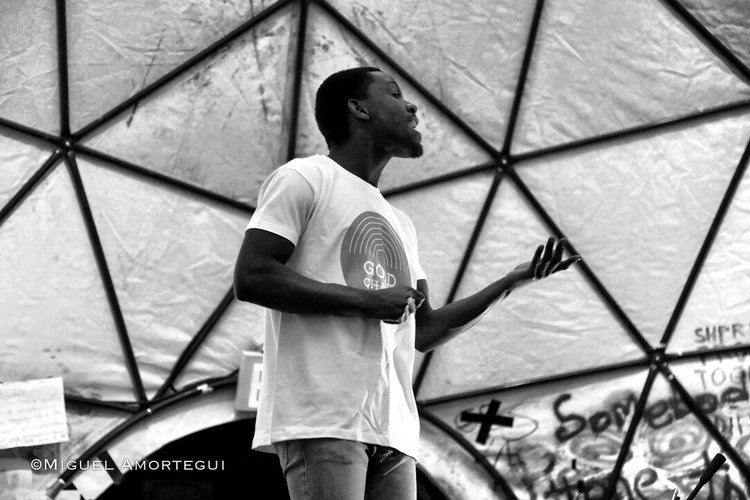 Tiny coffee shop universe. If you listen closely, you can hear all the little sounds connecting in harmony creating a melody of their own – their own daily music. Beans being crushed in the coffee grinder, the thud of the tamper and a soft whiz of milk being heated up. Quiet murmur of people looking around with curiosity and anticipation, lighting their cigarettes and puffing on them as they pass the time in conversation. Someone says ‘five minutes’ and so the back room of Hunter-Gatherer, cosy as always, with the fairy lights woven through a leafy ceiling and set up with colourful bean bags and wall hangings, slowly fills up.

Tonight, it really is The People’s Lounge, which is also what the creative collective behind all of this calls themselves. Only recently, they have launched a fresh project Global Sounds Portsmouth, designed to connect musicians from all corners of the world to share their cultural heritage and create new music together. The Journeys Festival International is a mosaic of artistic events and discussions that celebrate the beauty and diversity of cultures as well as raising awareness of the daily struggles refugees face on their Journeys. As a part of it, the Sound of Refuge duo are putting on a performance tonight – it’s amazing, free and not the only one! You can catch them at different places in Portsmouth up until the 24th of November

It’s great to see the dedication these people have – their passion for music, art and life itself goes hand in hand, it shows and it’s some seriously infectious business. A spark they are so willing to share.

As they casually sit behind the mikes, one of the two friends, John plays a hypnotically gentle instrument – the mbira. An important part of the Zimbabwean heritage, by some tribes it’s been played for thousands of years. Mbira is used in mystical ways, to connect with the spirits or chase them away, to bring rain during drought or to stop it during floods. It is believed to bring one a peaceful mind and strong life force and this is exactly what Sound of Refuge’s songs and voices vibrate with.

Mohamed hits the drum with his palms in calming repetition and the sound of John’s amazing voice clears the mind of anything but the present moment, fills the blank space with sound loaded with the significance it carries – the struggle of being a refugee, of having to create a home for yourself in a country so unlike yours. However, it also carries with it the sense of relief that it meant and brought, still does. All this communicated with the language of music, so simple and beautiful, the vibe of the evening stays welcoming and relaxed.

The last to be played is a song with everyone involved, the musicians as well as people listening in the audience and it is the best kind of wrap up, leaving us with a beautiful musical experience and a lot to think about.

Image by Sounds of Refuge