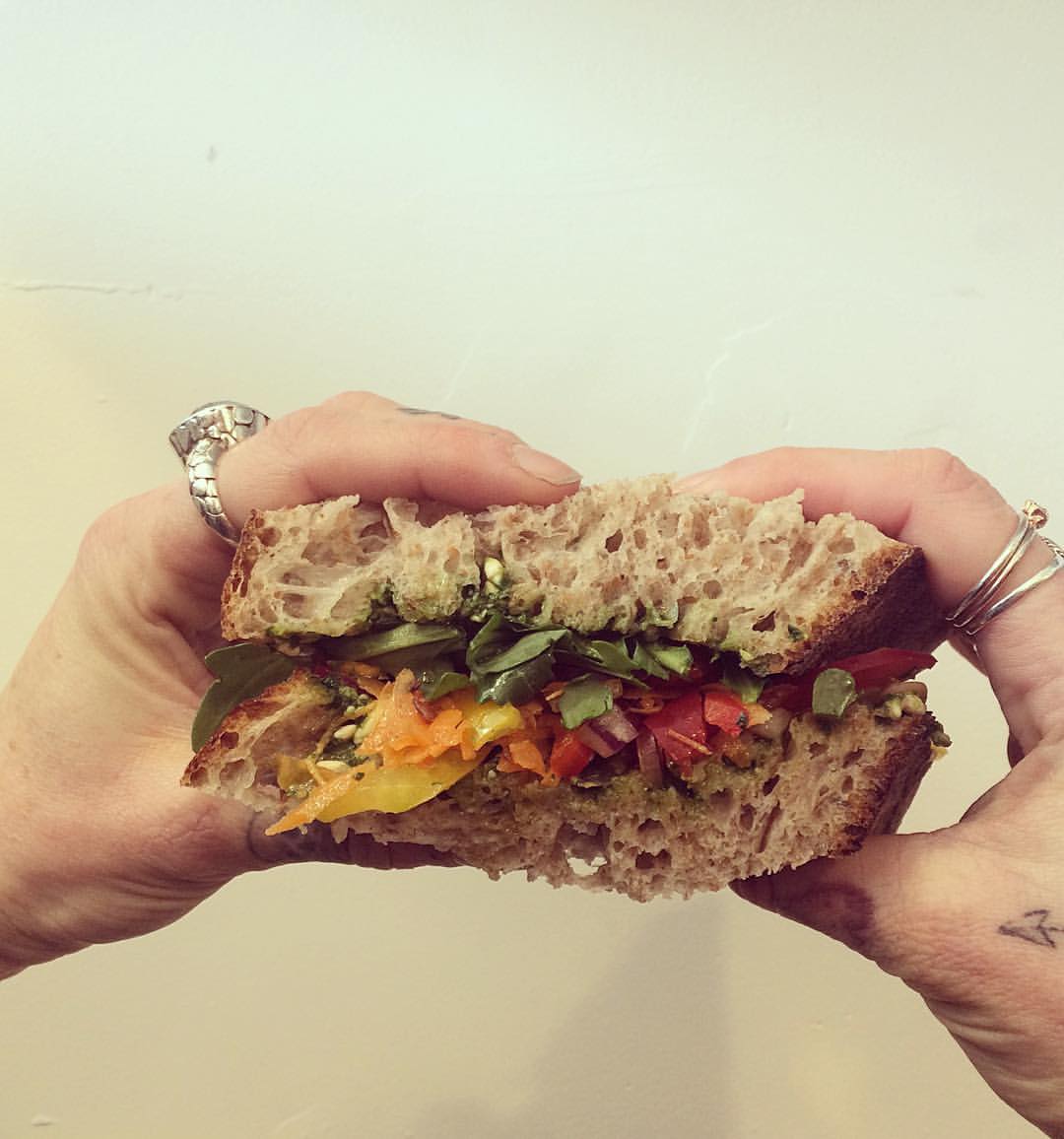 Spending time out and about drinking oat milk hot chocolates in The Southsea Deli and then wandering around while interviewing great independents and creatives for the blog, I have spent quite a bit of time reaching for a trusty old sandwich in Southsea. Seen as though it is National Sandwich Week, I thought I would share which of my sandwiches really did hit the mark and actually turned out to be vegan!

I held an event here last week, SouthseaFolk’s Gin Club, and kept popping in to see Daniel so we could put together a great evening based around Gin. One day I opted for a sandwich from the deli, hummus and roasted vegetables, and it was delicious! The sourdough bread was from Bread Addiction up the road and the way the vegetables had been slow roasted just made this an amazing sandwich! Finding this quite common filling done SO well was a lovely surprise but the deli uses such great ingredients it’s full of flavour. Highly recommended.

One Saturday I was popping in to drop some magazines off down Highland Road and I was starving, hank marvin’. This place was right on the doorstep. I hadn’t really had a chance to eat in here much but always loved the interiors and enjoyed a coffee before. I ordered the vegan pastrami sandwich and it was divine! Vegan pastrami with vegan mayo and gherkins wrapped around vegan cheese, all served in a sourdough roll. I never thought I would ever eat vegan pastrami, I didn’t even know it existed! Honestly, one of the best sandwiches I have ever had.

This place is amazing and a huge part of their menu is vegan! The prices are very good and although a bit further away from me, I have always found decent parking. They have a clear symbol system showing what’s vegan, as well as if you are picking a ‘healthy choice’. I had the hummus, vegetable salsa and avocado with lime and coriander wrap. It was very refreshing! Lots of lovely, vibrant flavours going on here with the lime and salsa. The thing is, there is such great choice on the menu I definitely want to go back and try more. Offering a good children’s menu too, it’s a great weekend place I can take my family.

Five minutes from me and one of the very first places I visited when I moved to Southsea last year. Whilst I don’t have a specific item to talk about they are a hotspot for us sandwich lovers. Delaney’s are just changing their menu to include a vegan option but the girls in there are so lovely, if you ask for a vegan sandwich they will adapt their menu to fit in with your needs. As a cafe, things are fairly flexible and always made with fresh ingredients as well as having the options of baguettes, paninis, wraps and bagels. Soups are always vegan and taste yummy!

I have to include Andre’s as I love their baked sweet potatoes. Cooked to perfection and something that I always crave when walking past! They have just won the Gold Award for the Sammies 2018 and were put through to the finals for Britains Independent Retailer Award. They just missed out on winning but to have the spot as being in the top 4 independent sandwich shops in the UK is one big achievement! To think they are right here on our doorstep, how cool is that? Although their menu isn’t a vegan one I beg you to try the baked potato, trust me you won’t regret it! I honestly think with just how amazing their sandwiches are that they would make a great vegan sandwich if you asked. They are such a lively bunch and always willing to help.

Has this made you hungry? I mean if you couldn’t get to any of the places I’ve mentioned and wanted to really go all out you could make the classic … ‘The Crisp Sandwich’ with cheese and onion crisps (or your favourite vegan alternative). It would have to be super soft fresh bread though, that’s the rule.

Yeah, yeah I know, gone are the old 80’s where we actually did that although, I still might. I loved making a crisp butty up! Anyway, what’s your favourite spot in Southsea for/or filling for a vegan sandwich? I bet there’s plenty more out there to try.