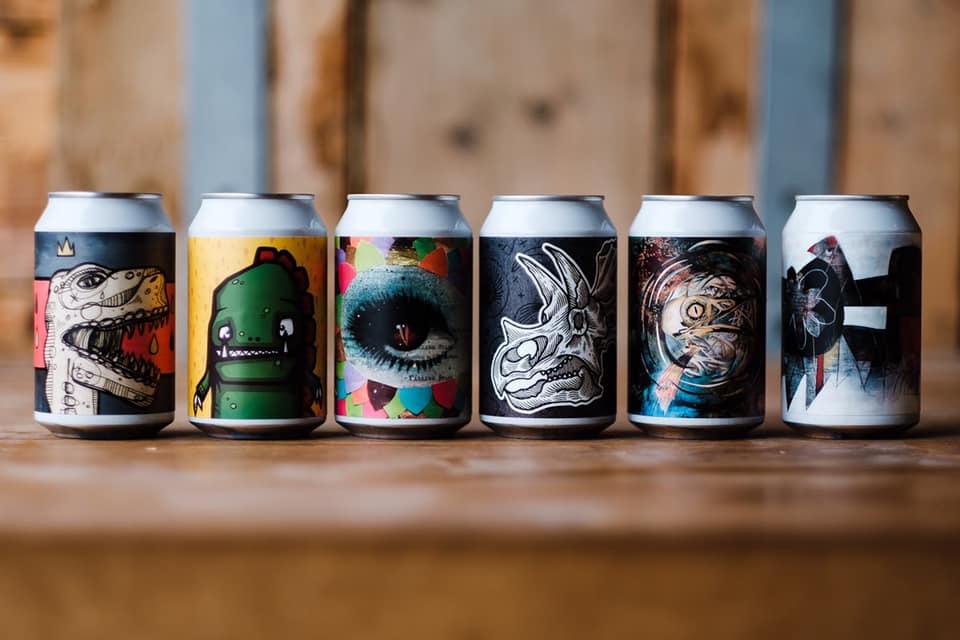 The air was hot and thick, the half-light of sunset illuminating the bodies as they rhythmically packed box after box, glinting off cans. The room was silent but for the scrape of cardboard, shuffling bodies and the sound of hammering from the next room. Everyone had their head down focused on their own essential role in the production line. This was no sweatshop in Asia but the scene of launch night final prep for the second installment of the mighty JurasSIX collaboration.

Staggeringly Good and Playdead Studios have teamed up once again to deliver a limited, collectible six-pack like no other. Showcasing rad dino-themed artwork by incredible artists, both local and further afield, these six-packs are so hot it practically burns when you touch them. The residents of Southsea clearly agreed as the queue for entry snaked around the corner and all the way down the road, long in advance of doors opening. No doubt tempted by the promise of autographed packs, emblazoned by each of the 6 contributing artists, for the first 20 through the door.

At 8.6% the idea of this DIPA is enough to make the faint-hearted quiver in their boots but the result is a surprisingly light, crisp Imperial. The additional malt delivers a gorgeous toasty palate and the balance is spot on, full of caramelly goodness without feeling overbearing. Don’t make the mistake of hanging onto these cans without drinking their contents for prosperity- get stuck in while the beer’s at its best and find a creative way to display the cans once suitably intoxicated…examples on a postcard wholeheartedly welcomed!

Samo, the owner of Play Dead, delivered another selection of contrasting yet complementary, hugely talented artists to adorn the cans. Impeccably packaged, each one hides a cheeky secret…Peel back the label and reveal the artist’s unique bio to engender a ‘Beer is Art’ mindset for optimum enjoyment. It’s a particularly clever concept that I enjoy very much, engaging a second sense other than taste by visually enticing the drinker for an immersive experience. Craft breweries and artists alike can be interpreted as anti-establishment agitators but the authenticity of the collaboration has to speak for itself to be a success. Judging by the turn out on launch night, the community of Southsea is fully behind the cans and their contents and it’s always so damn good to see a crowd united in support of their local businesses.

A full exhibition of dino-themed works from the 6 contributing artists will be on display at Play dead Studios until the middle of October so drop by and explore further works and upcoming projects from the 6 compelling artists in greater depth. To learn more about the individual artists, go and buy yourself a bloody Six pack! Available from Play dead studios on Highland Road and Staggeringly Good Brewery on Rodney Road.