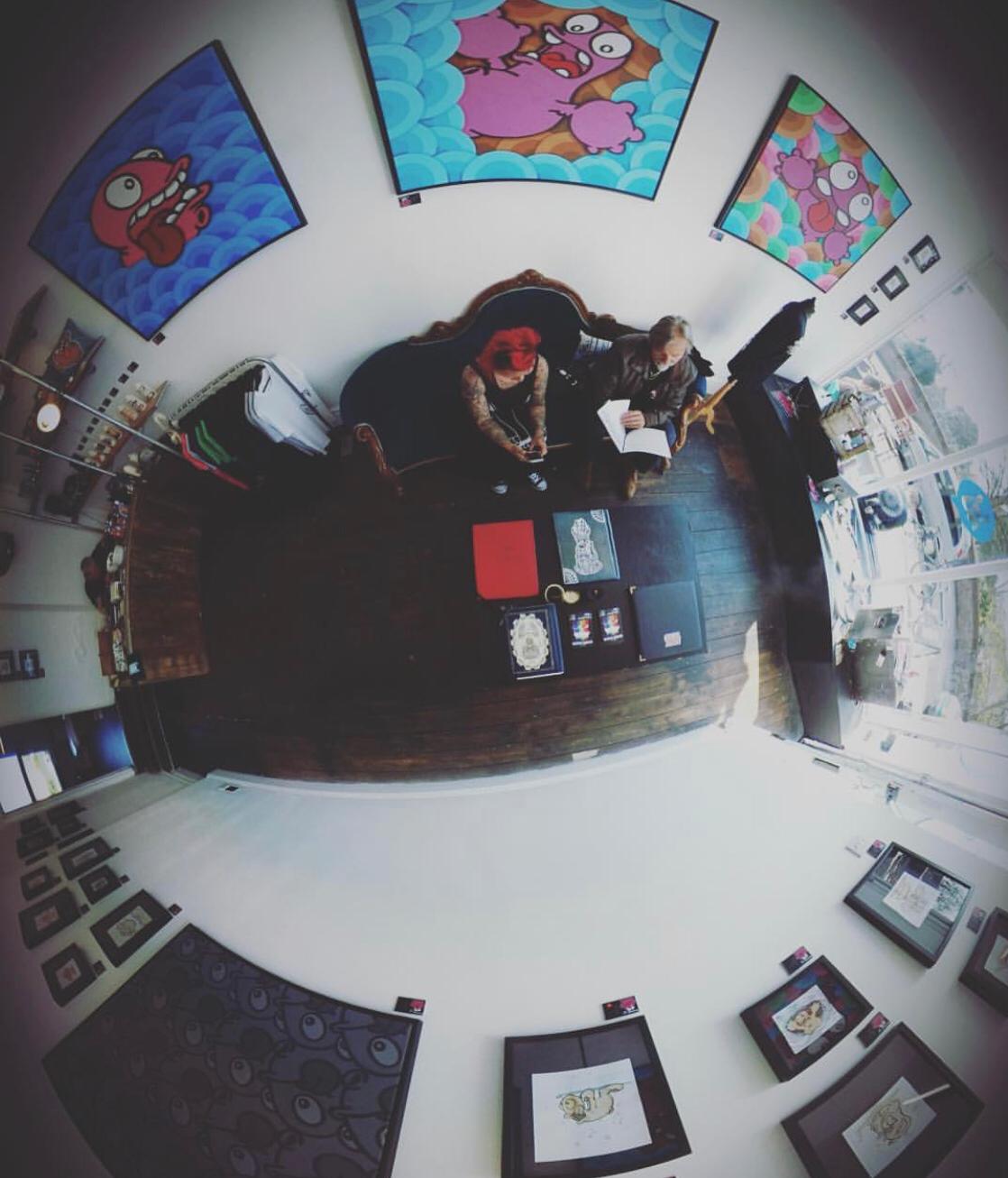 Samo, owner of Playdead studios, is necking coffees at a rate of 3 to my 1….and I drink a LOT of coffee. We’re discussing the retrospective of PlayDead’s work surrounding the 4th anniversary and I need the coffee because I’m exhausted just hearing about all the hard work. Nothing compared to Samo though- he’s tired as hell! Tired from 36 back to back exhibitions, tired from countless collabs with Southsea’s most influential businesses, the workshops, the artist talks, the safe space campaign, the pride & LGBTQ activism, the international commissions, the prominent paint jams…

Tired maybe. Happy? Hell yes. Proud? Rightly so, and Playdead’s community is even happier and even prouder. The work never ends when you are an independent business owner or freelancer, it takes courage to make the leap but it can also be the gift that keeps on giving. Seeing your ideas come to life, having autonomy of decision and the opportunities that open up with success taste all the sweeter for flying solo.

Samo is proudest of his activism work and this feeds into his creativity to ensure the ideas just keep on coming. Founded in 2015, Playdead has gone from strength to powerhouse; consistently delivering fresh, stimulating content to its army of loyal followers. Radiating a fearless passion and committed to engaging and inspiring the community, Samo has organically achieved more than he, or anyone, could have possibly imagined.

It’s far from over yet though, there’s no rest for the wicked and sleep is for the weak. There’s just far too much ambition swirling round that belly full of coffee.

Samo and I have been besties since we were 12 years old and, for me, his greatest achievement has been the unwavering courage in the face of adversity. As a trans man, he has sacrificed his own privacy, and often safety, by publicly documenting his transition. His dedicated mission of visibility and education is key in uniting society across the globe and engendering allies to align the social consciousness for acceptance and equality. Playdead is a symbolic and literal ‘open door’ to all and this is seriously powerful.

Playdead’s 5th year of business is set to be bigger and bolder than ever with a cracking team of tattooists on the benches and an inimitable line up of intriguing exhibitions and ambitious projects. Don’t miss the next in line: Opening night 26th October showcasing artist, Gritt- it’s gonna be a banger! And, if you haven’t already secured your cans from the Staggeringly Good collab, Jurassix, you need to move quick…stock isn’t hanging around for good reason!

With regard to Samo’s inhuman coffee consumption, there’s an obvious explanation. Samo is clearly a Queer coffee-powered superhero on a mission to unite, strengthen and inspire his community. It all makes sense now. You can sleep when you’re dead mate- cheers to your achievements and here’s to many more!