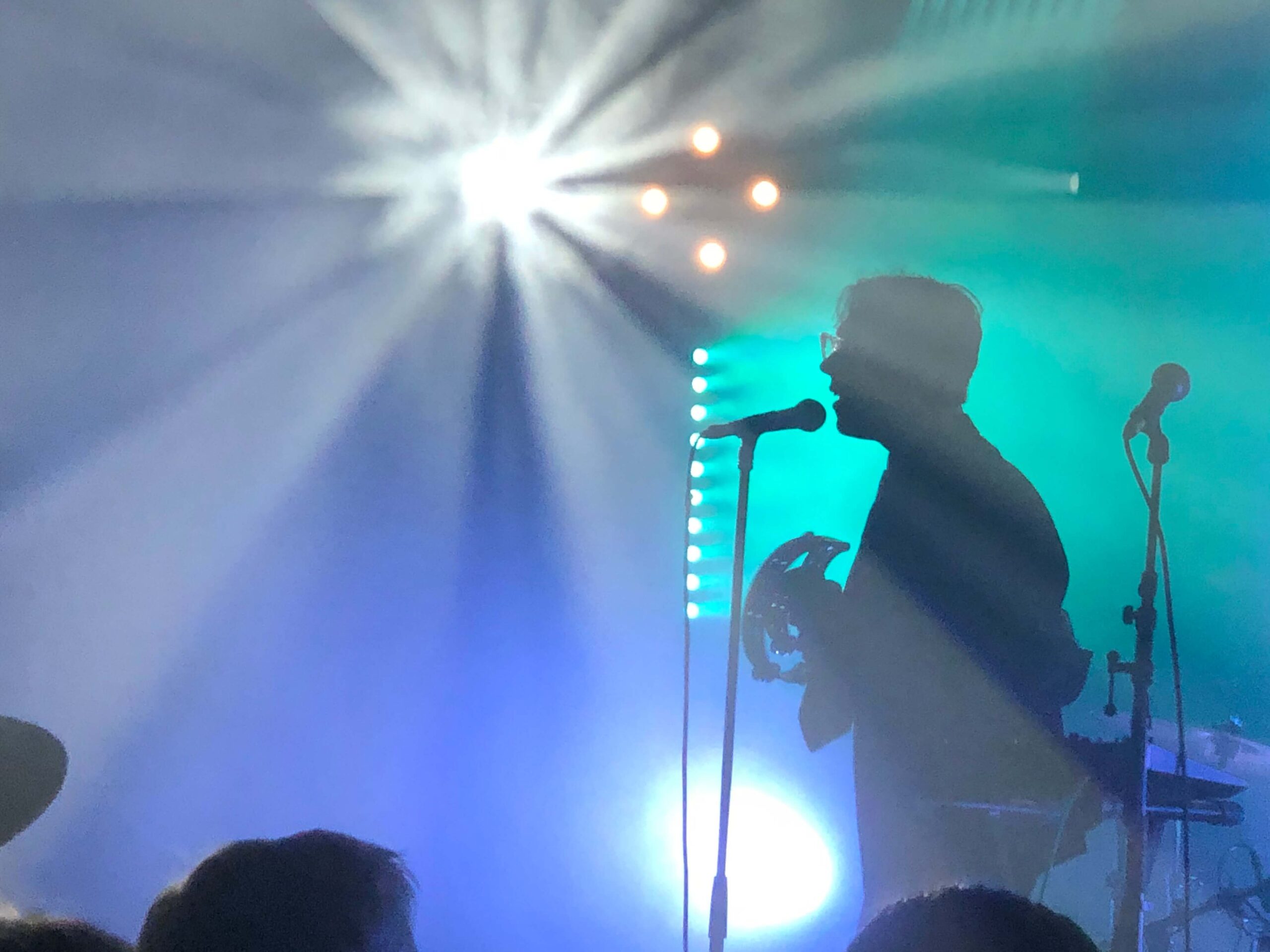 I first heard about Hallan when I downloaded their single ‘Hands Up’ I loved the graphics and their latest offering so I helped them do an Instagram takeover. Falling in love with their style, I just felt this band were different to so many bands around at the moment and had true originality. They had an iconic sound like they should have started back in the late 80’s and yet here were four young lads expressing their art-punk style music on a new generation. I felt their music had a sound almost with a Talking Heads influence which is strange when you read the interview below and realise that drummer Adam recently bought a Talking Heads album.

The band came on stage after two really good support bands, Fake Empire who have a Joy Division style and really got the crowd going and then Slant, a Brighton band who definitely had a glam rock edge they proclaim themselves to be! Both girls who sang and complimented each other had a stage presence and I felt looked like a young Susan Sarandon and a young Debbie Harry which was exciting to watch.

The headliners came out on stage to cheers from the crowd. Connor the lead singer has a cheeky-looking face and he didn’t disappoint the audience when he jumped over the barrier a few times during the set and also got in the crowd dragging his microphone with him. I feel they are an iconic band before they have even created an album so I do see them heading for bigger stages across the country.

You could tell the boys loved being at a home show and stated the last time they played the Wedgewood Rooms to a crowd of 30 they enjoyed it, but their hard work and cool edge have developed a vibe and certainly a packed-out room. Across the dark space stood a few Hallan t-shirts and there was definitely a buzz about this gig with not only the songs that would be played on the night, but for the future, this gave a tinge of anticipation to the air. Having already been appreciated on radio 6, there is a great demand for Hallan and the sound of post-punk to an audience with only a debut EP to back them up. Now that their UK tour is over and the feelings they got playing different venues and meeting new crowds, you can see they are itching to create more. Defintely a band you should go see before they get too big as I do feel a smaller venue really captures a raw, innocent side to a band.

I caught up with Adam the drummer from the band while they were still touring for an interview.

Where did you get the name Hallan from to make the name of the band?

Hey, I’m Adam from Hallan. So it all started in ’98 when our bass player was born with a strange birthmark on his right thigh. It looked like a word…Hallan. After years of trying to decipher its meaning, a boy came along called Conor and upon seeing the word fell into a semi conscious state and began rambling what sounded like song lyrics. Since then we’ve been using what was remembered of that day as material. Conor was so effected by this he changed his middle name to Hallan.

What were your earliest musical influences that you loved listening to?

We all grew up with varying interests in music, mostly through our parent’s guidance or whatever we happened to stumble across on the early days of the internet. Conor would have been sat in his cot with The Stranglers and The Clash as his lullabies. Whereas I (Adam) was raised to the sounds of 90s Brit-Pop amongst other things thanks to my mum. And I don’t think those tunes ever leave you.

Selling out the Wedgewood Rooms to a home crowd, Where would be your next goal to play?

8.9.21 is a date that will never leave our minds now. But as a band we always look forward, so for us playing Reading festival would be another big highlight. Considering we’ve all been multiple times, I think our collective brains would implode before walking out on any stage there.

What was the last album you bought and why?

The most recent album I got was ‘Talking Heads – Speaking in tongues’. Cracking album by a great band, with some very cool artwork front and back. When perusing which one of their albums to get first it stood out to me. And with songs like ‘Burning down the house’ & ‘This must be the place (Naive melody)’. Give it a listen if you haven’t.

Oooh tough question. With half the band vegan/vegetarian this could cause a rift in the band’s status quo. I’m a firm believer in pepperoni. But many a Hallan night has been spent discussing the high quality of Papa John’s vegan pizzas/cheese & marmite scrolls. So Papa John if you’re out there and happen to be a Hallan fan. We’ll take a sponsorship any day.

Best gig you have ever been to?

As a band getting to watch The Murder Capital headline The Wedgewood Rooms in February 2020 was a great experience. Stood in our hometown watching a band we all liked and the band giving it everything was brilliant. For me personally seeing Gorillaz in the guildhall for their warm-up shows was insane. Seeing them without the arena level fancy LED screens and holographic animated characters, just some people in a room with instruments and Damon Albarn stood about 30 feet away shouting into the microphone. What’s not to love.

What’s new in the pipeline for Hallan?

We briefly mentioned on stage at our headline show we would be in the studio very soon. And it may be sooner than you think. Hoping to forge a new sonic era for Hallan as we move forward. Keeping an eye on what people enjoyed during our tour has given us the confidence to take some risks and in true Hallan fashion, do what people may not expect of us.

Carousel Photos by Nikki from Mix It All Up 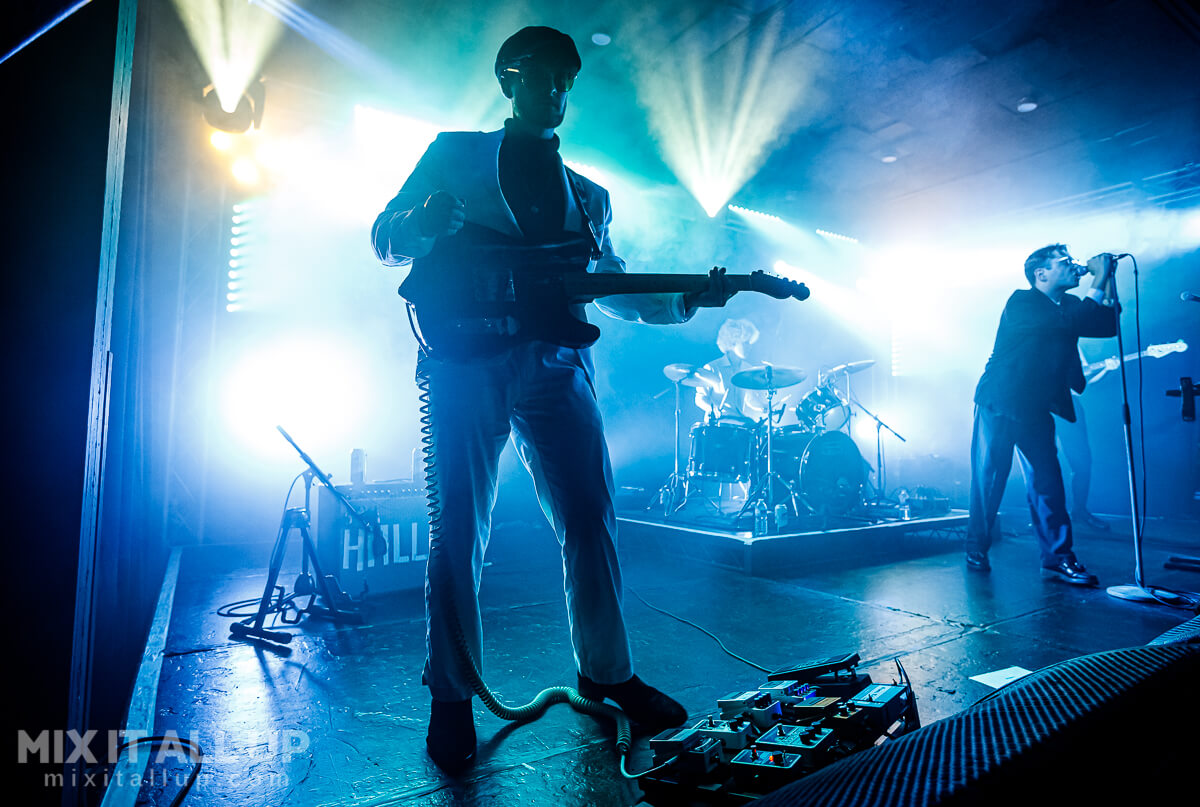 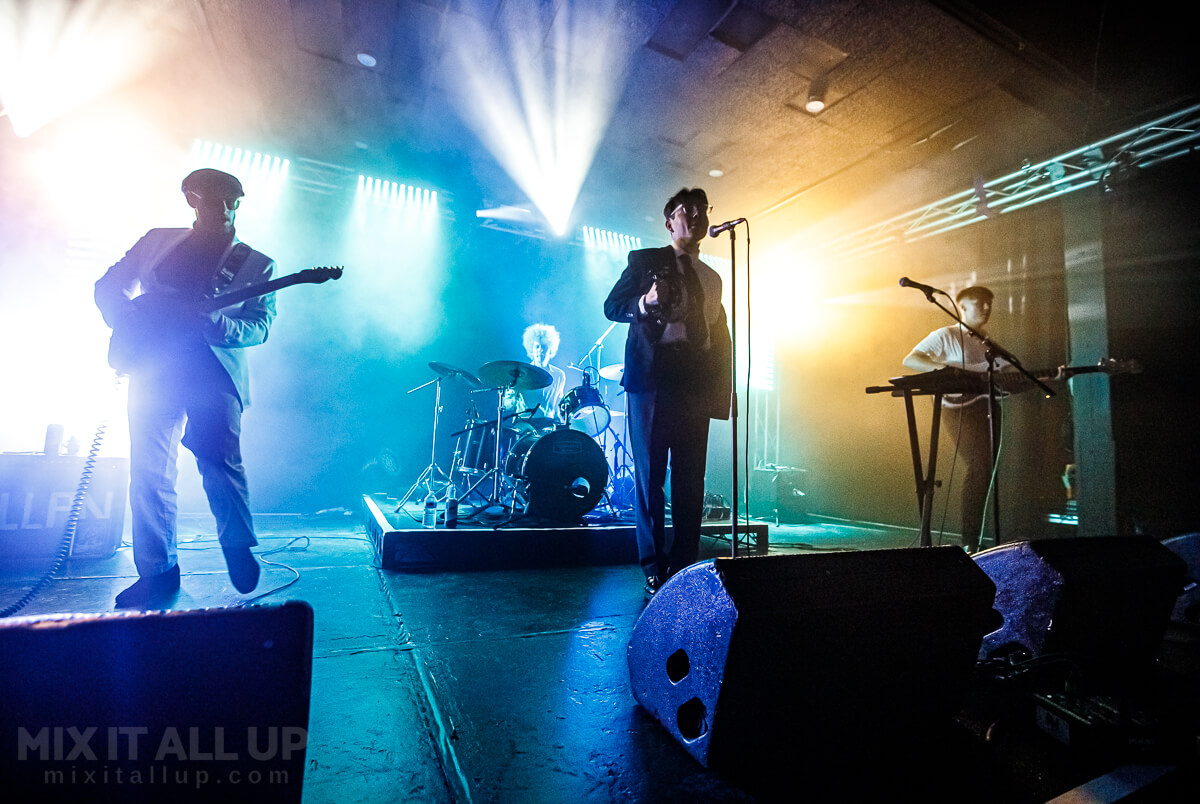 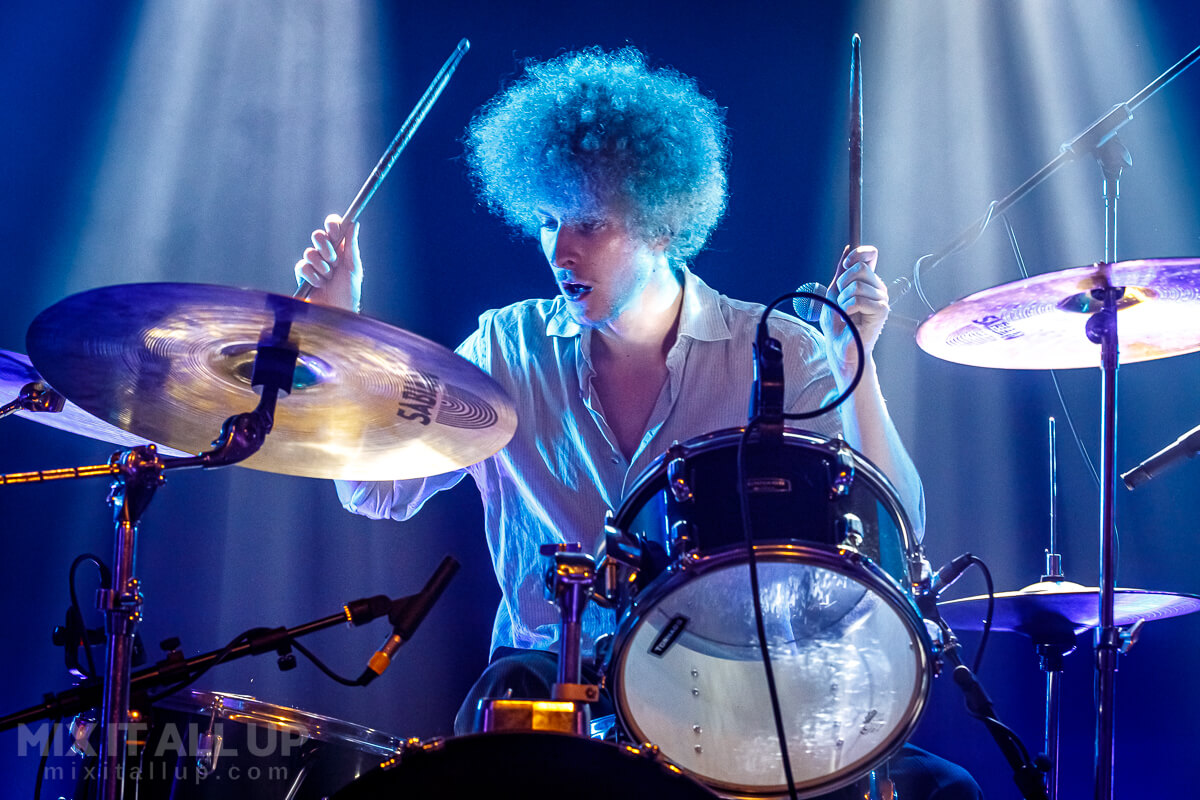 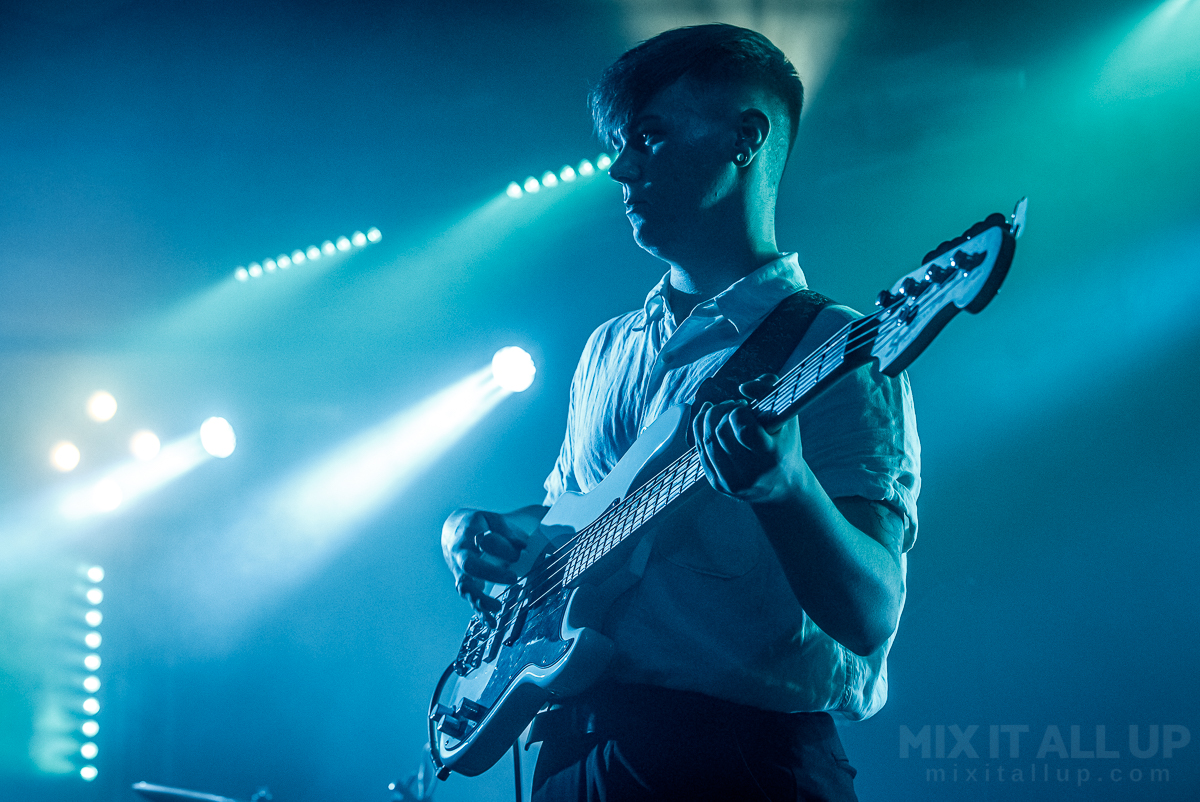