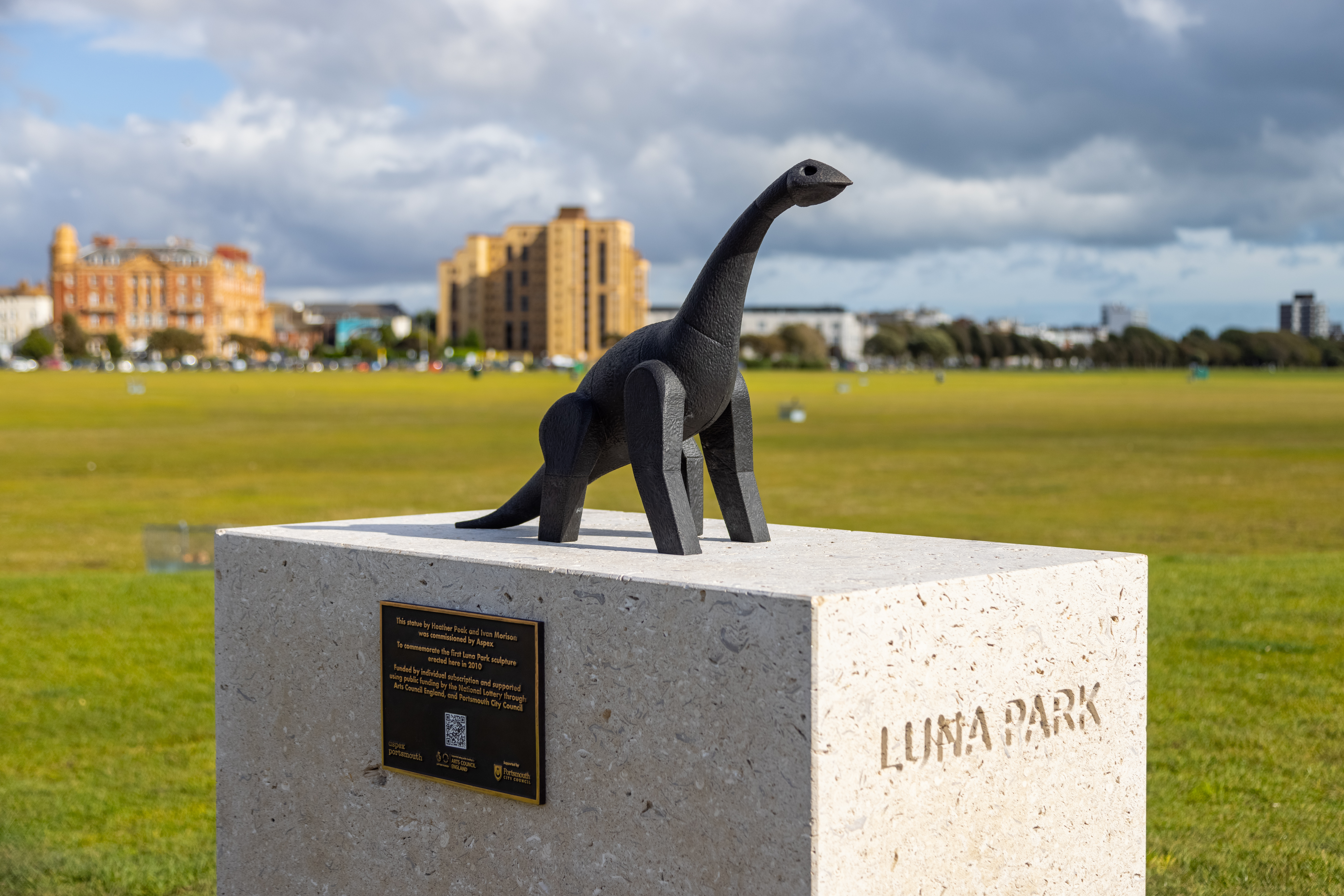 I stand for language. I speak for truth. I shout for history. (2021) is an eagerly anticipated new public artwork for Portsmouth designed by internationally renowned artists Heather Peak and Ivan Morison (Studio Morison). It can now be seen by the public on Southsea Common.

The piece has been conceived as a long-lasting tribute to their 53-foot high 2010 artwork Luna Park, which tragically burned down on Southsea Common. The new work responds to ten years of public demand to ‘bring back the Southsea Dinosaur’.

This new piece of public art consists of a bronze sculpture of the original, affectionately known by local residents as ‘The Southsea Dinosaur’; atop a fossil Portland stone plinth which is 1.4 metres in total. The work is located within a direct sightline to the position of the original Luna Park sculpture.

The title is quoted from a song called Do You Want New Wave or Do You Want the Truth? by American punk-rock band Minutemen (1989). This quote also appears in a text by Eric Fredericksen titled A Strong Dark Presence, commissioned as a response to the loss of Luna Park in 2010. The text can be read here

In addition to key information about the work, a plaque on the sculpture’s plinth features a QR code which when scanned with a smartphone connects to an Augmented Reality experience, showing a digital rendering of the original artwork seemingly in front of the user, on Southsea Common accompanied by the sounds of Portsmouth City Band, who attended the original launch. Viewers will also be able to visit Aspex’s website to visit a digital archive of memories contributed by the general public in honour of the original artwork including a video of the 2010 launch.

The project is commissioned by Aspex, Portsmouth’s contemporary art gallery, currently celebrating its 40-year anniversary with a programme of contemporary art activities: ‘Aspex (life begins) at 40’ at the gallery and online. Amid the launch of a series of digital works by early career artists and an exhibition programme in the gallery, the sculpture is the centrepiece of the gallery’s anniversary celebrations. The commission is an extension of a long-term relationship with the artists, the only one of its kind to feature in the anniversary programme.

During the first lockdown in 2020 caused by Covid-19, and leading up to Aspex’s 40th year in 2021, Aspex Director Joanne Bushnell reached out to Heather Peak and Ivan Morison to discuss publicly acknowledging ten years since Luna Park. The artists offered to make a proposal for a sculptural and digital artwork, as a tribute to one of the city’s most renowned art projects.

“We are thrilled to be able to share this work – over a decade after the original Luna Park was installed on Southsea Common. The artwork is firmly and fondly lodged in the memories of local people and lives on through younger generations as a kind of myth or local legend. I stand for language. I speak for truth. I shout for history is part of Portsmouth’s heritage and we are delighted to be unveiling it this Autumn. It is hoped that the piece will generate new memories for people who live here and those visiting Portsmouth. More than 12,000 local residents joined an independently created Facebook group called ‘RIP Southsea Dinosaur’ when Luna Park tragically and mysteriously burned down in 2010 and since summer 2020, a Crowdfunder raised over £10,000 to build our bronze replica of the goliath. There is a tremendous spirit of warmth towards the original work and we are overjoyed to be exhibiting it this year as part of our anniversary celebrations.” said Joanne Bushell, Director, Aspex

“I stand for language. I speak for truth. I shout for history existed as a story. The story of the fictitious dinosaur it was based on. The story of its making in a far off country. The stories of the people who encountered this huge stranger to their city. And the story of its shocking end. It’s that last part of the story, the final twist, that has brought Luna Park closer to the hearts of the residents of Portsmouth – something sad that happened and a little shameful. This new iteration is a celebration of all those stories, a bookmark out on the Common marking that particular page in Portsmouth’s history. For us as artists, Luna Park is one of our fondest and strangely most successful works, and we are so proud and delighted to have been asked to continue it forwards in this way.” said Ivan Morison, Studio Morison

The Grade II registered park and conservation area of Southsea Common also features a number of memorial sculptures. The architectural language of 'I stand for language'. 'I speak for truth'. 'I shout for history' sculpture is a contemporary take on this and uses a familiar visual language of ‘paying tribute’.

By The Aspex Gallery