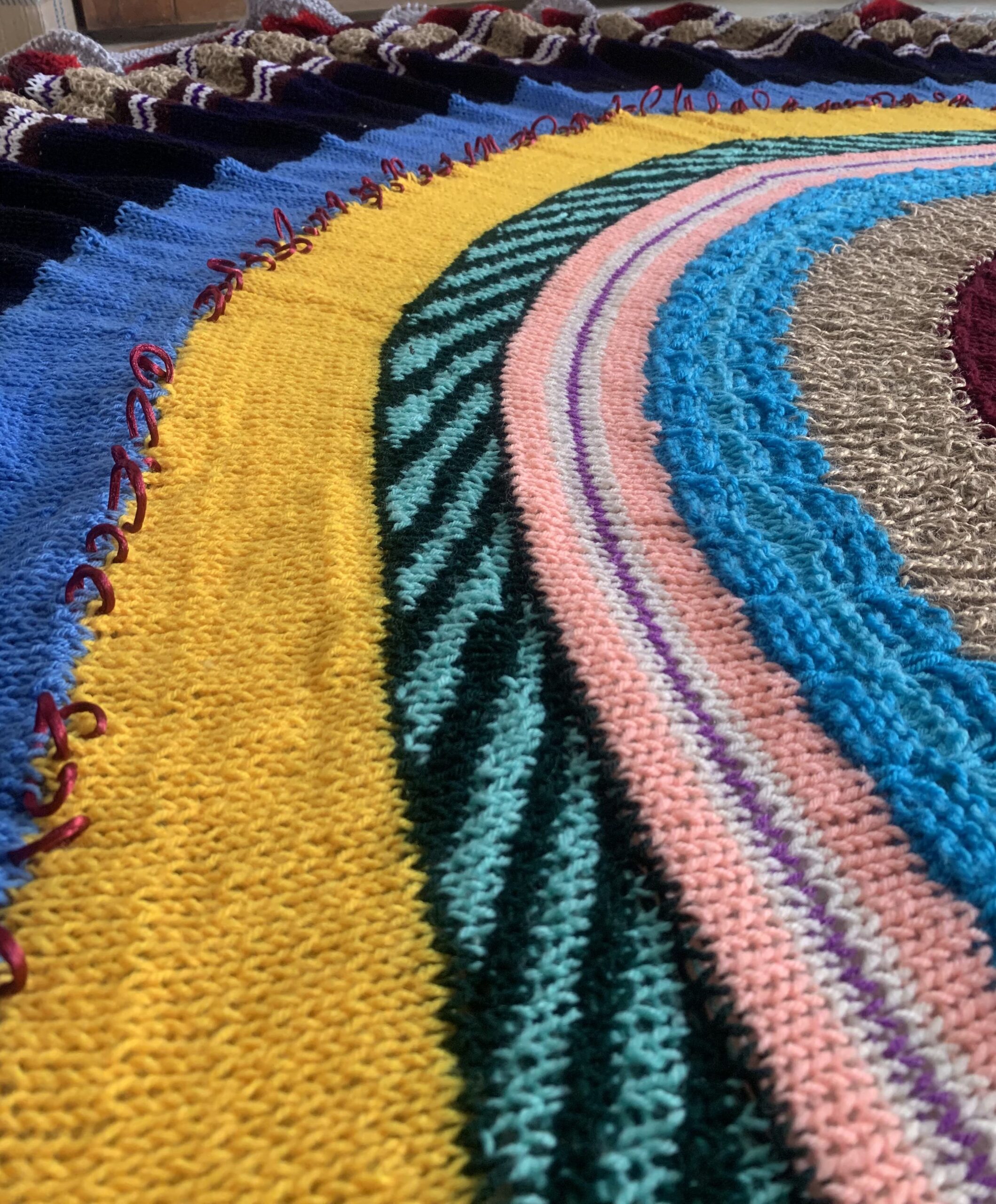 Pooja Shah is a PhD student at the School of Architecture, Faculty of Creative and Cultural Industries at Portsmouth University & ‘RangKnit’ is a solo show of works created during her practice-based doctoral research. The exhibition which opens on the 10th of August includes photographs of her processes and some of the large Rangoli-inspired knitted pieces the details of which, along with more information about Pooja’s practice, can be found here.
Pooja knits intricate patterns seen in Indian Textiles using yarns and knitting needles. Lying somewhere between contemporary knitting practices and Interior design, these circles, concentric compositions create a complex world recording different movements of body, conversations and experiences. Her fascination with knitting dates back to 2013, when she first learnt to knit scarfs for herself and for her friends as a farewell present. When she began her PhD, she explored the history of knitting in the UK and Portsmouth –a practice that revealed an organic transition from making for self/family to building surfaces that can allow an interaction/conversation with others. Drawing from a variety of cultural and societal influences, she uses different yarns, colour and pattern palettes.

The main argument that Pooja attempts to make through her work is that ‘Home’ is not a mere place/space/feeling that is left behind –when a migrant travel far away from her/his homeland either temporarily or permanently, rather home can become a ‘practice’ that is continued into a different mode. In other words, she demonstrates how the knowledge she had gained through making Rangoli (at her homeland while growing up) can be transmitted and transformed into knitting (a traditionally western practice) so that she can feel at home in the UK.

Having worked at Jacob Hashimoto studio, a New York based artist, who shares half- Japanese and half-Irish roots, she learnt a great deal on how to fuse two different cultures together (asking questions such as: what happens when one culture overshadows the other and how/where can an element from a particular culture be left loose in order for it to breath and grow).

2 WORKSHOPS will take place during Pooja Shah's 'Rangknit' exhibition which starts on 10th August. RANGKNIT on Saturday 13th August 2-4pm is a FREE workshop inviting local people to a communal, informal Knit-in! Pooja will explain how she started to incorporate indian textile & traditional Rangoli patterns into her large pieces during her enforced stay in Covid locked-down England as a way to deal with homesickness & to connect with her family & community back home. Knitting has often been a communal activity and the therapeutic nature of making something beautiful that develops apparently organically has been recognised anecdotally for some time. Pooja will have yarns and needles here or bring your own & something you have been working on or start something new in the company of fellow knitters? To book a place on this workshop contact Rebecca info@jackhousegallery.co.uk.

Practical RANGOLI on Saturday 20th August 2-5pm is your chance to have a go at making a traditional Rangoli under Pooja's supervision on the gallery floor! Pooja has incorporated rangoli making into her knitting practice in both spiritual & practical ways.Throughout India, women perform the traditional art of threshold painting: 'it links Hindu women to the goddess Lakshmi whom they invite to depart her heavenly abode and rest momentarily at their thresholds upon an intricate rice flour diagram. In this manner, the Goddess brings good fortune, enveloping the home in an auspicious sphere of protection. Rangoli threshold art reflects the Hindu concept of the interconnectedness of the universe. This is symbolised even in the use of rice flour as an artistic medium & is the “feeder of a thousand souls” providing nourishment to the smallest of insects throughout the day. For in a fleeting moment the creation will disappear, vividly remaining only in the memory of the one who created it.' Asian Art Museum.This workshop will cost £6 per person to cover the cost of the materials. To book a place on this workshop contact Rebecca info@jackhousegallery.co.uk. 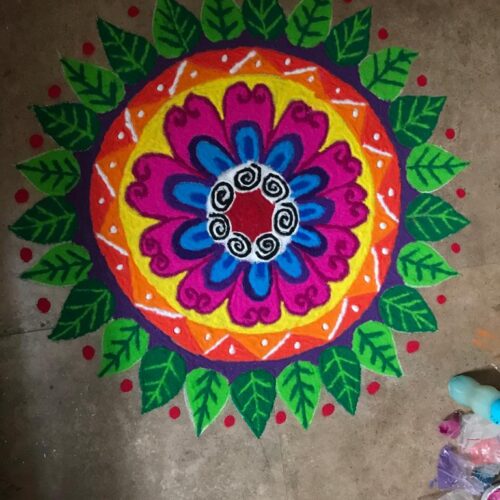 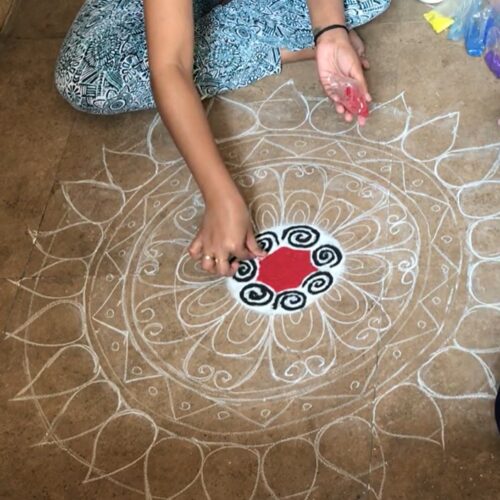 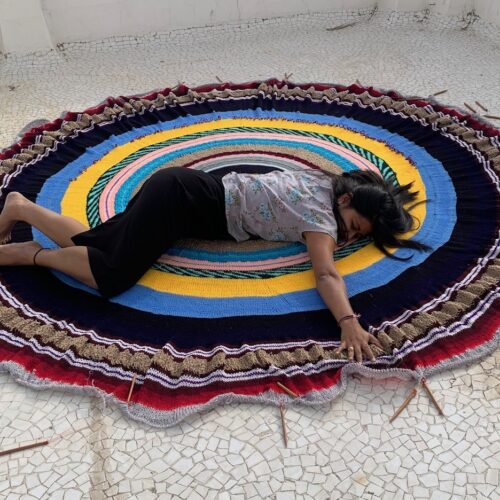