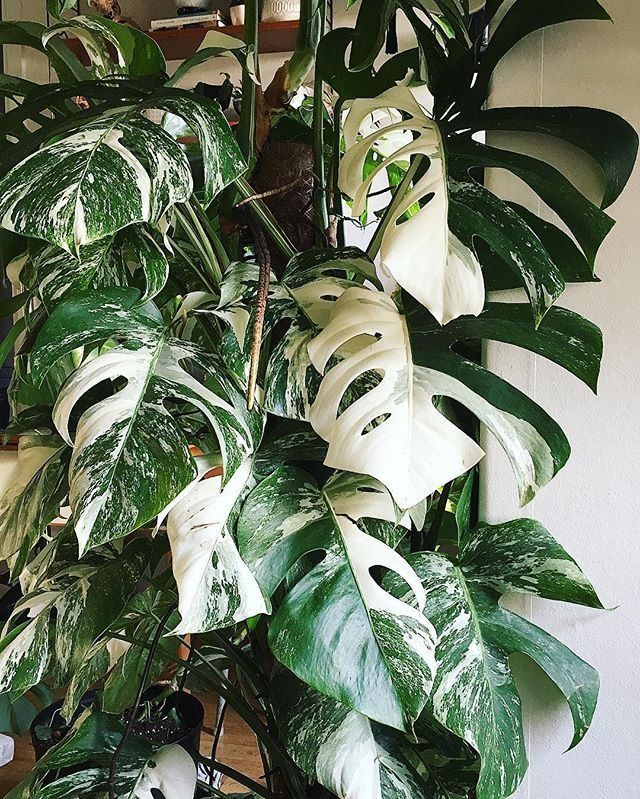 “This time next year Rodney, we’ll be millionaires”

We have always called ourselves enthusiasts rather than experts. Enthusiasts with the indoor garden, the urban jungles inside our homes, the beautiful green shade of a healthy plant against the exotic shade of pottery terracotta. The mixture of these colours was what attracted us to the world of house plants creating an enduring love and fascination.

In an effort to enrich the mind, nourish our enthusiasm and educate ourselves, research into this massive subject has uncovered an extraordinary world. We here at Pretty Green HQ had to retire to the pub after learning the prices some collectors are willing to pay. Rare plants that sold for under £100 two or three years ago now sell at online auctions for thousands. Last summer, a New Zealand seller made headlines when a small eight-leaf pot plant known as Mini Monstera sold for £14,000.

The fabulous Monstera Albo is where all the fuss is currently focused. The Monstera is commonly known as the Swiss Cheese Plant, however, with the Albo variant the familiar shaped leaves are variegated. This is where naturally lighter patches appear which can be light green or yellowish. However, with the Albo, the variegations are white creating a beautifully unique appearance. As the plant lacks the green leaf surface area of other variants the process to photosynthesize is limited and so this variant grows at a much slower pace. Its current popularity and scarcity both creating its extraordinary value.

A sixty-centimetre example of this plant can fetch up to a thousand pounds online, so I would suggest having a quick check of your own Swiss Cheese Plant and if it’s showing the fabled white variegation, you (just like Rodney) could be a millionaire!

Brexit and the pandemic have predictably caused the value of cuttings and plants to sore here in the UK, thus leading to an underworld where the shady and unscrupulous conduct their sinister lives of plant deception and racketeering. I know that sounds like I should immediately cancel my Netflix subscription but I kid you not evidence and research would suggest a criminal underbelly.

Since the Victorian era, would be botanists have been collecting plants from around the globe fuelled by the fashion of the time. In the modern era, these scientists have been replaced by groups dedicated to a practise known as Prop-Lifting. This is where groups steal cuttings from nurseries and botanical gardens believing it to be victimless and of no consequence. Later, of course, going on to sell these for hundreds of pounds.

Reports of pot plant collections being raided at gunpoint or Botanical Gardens trimmed at scissor-point have been known. Some unscrupulous sellers have even taken to painting the leaves white mimicking variegation. Also, regular Monsteras are often sold as the variant Albo. The patches of light colour on the leaves are evident but are actually plants infected with a mosaic virus. This causes the leaves to show the desired variegated stripes but not for long as the plant succumbs to the disease soon after the transaction has been completed and the seller vanished.

There is also the healthy online trade of selling ‘nodes’. This is just an inch or so of a prized plant with warm guarantees suggesting a successful propagation will result in a beautiful example of the plant it was allegedly cut from. This must be a modern-day equivalent of Jack’s magic beans, nevertheless a thriving trade.

Finally, lovely reader here at Pretty Green HQ we have secured some lovely Swiss Cheese Plants to brighten up the office. Now, where did I leave that white paint…

By Jules from Pretty Green Pots and Plants