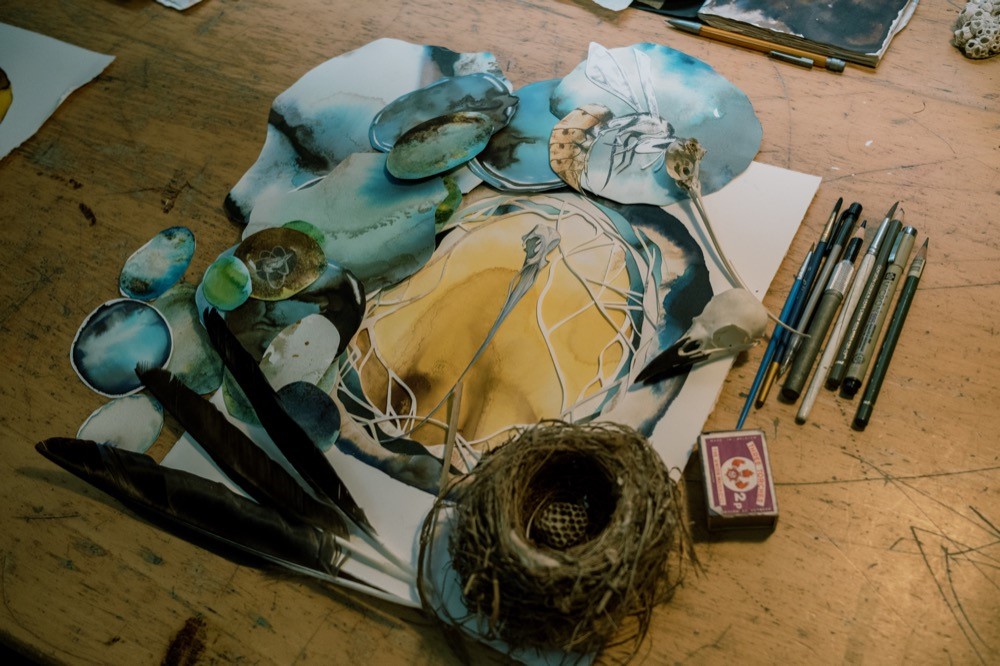 When We Were Cows has a well-anticipated exhibition called ‘In My Darkest Daydreams We All Survived’ at the Corner Collective in Southsea on the 29th and 30th of October from 11am until 4pm. The artist hasn’t had a solo show since 2018 and brings a new depth to his work. Fans of the artist can expect a new exploration of art that connects with conservation and larger pieces on display that bring a sense of drama to the show.

Speaking to the artist John Ainsworth, I asked him where did the name ‘When We Were Cows’ come from? He said that he was in school teaching, doing his day job when he listened to his student’s conversation one day. They were chatting during their art lesson and were having a conversation about their science lesson. One of the students began a sentence where he said “Like when we had two stomachs and when we came from cows." This brought about so much laughter and humour in John’s head for him to hear such a random science quote that he said the name WWWC really stuck in his mind and he wanted to use this with his art. Being someone who always wanted to separate his art from his teaching job, John said that this became a very interesting story.

Having studied at art college, John then went on to study for a fine art degree and became fascinated with museums. Displays and exhibited treasures really grabbed John’s enthusiasm. He loved how the aesthetics of displays along with the architecture of the museum system worked in these old buildings. Labelling in museums and how collections were installed became an obsession which led to the planted seed and deep love for Entomology.

Teaching art day to day, he then found an outlet for his busy work by going out into the countryside on his bike and also on walks. Having an ancient oak wood on the grounds of the school where John works has always offered a perfect nature trail for someone like him to collect interesting objects. There has been for many years crows that have settled there and as their nests are only in use for around 9 weeks, it means there are some interesting finds to be discovered. John said that he has always collected a new crow feather every year so he can compare each feather and build a collection.

Tracking down and gathering a selection of natural objects is a wonderful pastime that John loves to do and he has collected feathers, crow skulls, stag beetles, hornets, deer bones and moths over the years. Out of all the insects John has ever drawn, his favourite is the hornet. Speaking as to why this is he said " I found a hornet outside my house and it was curled up dead, just laying in the gutter. This was at a time in my life when I started to draw again having had a long hiatius and I really felt as though I had stumbled upon treasure. This creature was so tiny, so powerful and complex but also very insignificant in our large world." When asked about foraging for curiosities the artist said " I like to shine a spotlight on things that people might walk past. Focussing on objects that are ignored and discarded. Everything drawn is something that is found and I like the idea of direct observation, the practice of perfecting my drawings and sketches. Where feathers have fallen from a bird and landed in a gutter means it has been part of a life cycle and an existence that I know nothing about. I think about how this part of the bird I have found would be regarded as useless but that doesn’t make it less beautiful. I feel drawn to marking an existence and It could be a pigeon or bird of prey, there is no hierarchy in this process. I believe there is something endearing in celebrating those things".

Talking about his admiration for Kurt Schwitters a German artist, John said “I really appreciated his work in my early university days and love how he puts collections in order. When he talks about the ‘Strategies of a Collage Maker’ he says “For every work he makes originates in acts of collecting and ordering; each can be construed as a display of select items supplied by his scavenging expeditions; each is analogous to a showcase or cabinet of curiosities." I love how his words make sense to me."

Describing the whole cycle of WWWC’s journey, you can see that the discovery of an object found in nature is just as appealing for the artist as the drawing that is the end result. There has been a desire by people across the world to source, collect and discover items to keep and have as a showcase as far back as the 105,000 years ago."Kiara Timpano, Professor of Psychology in the University of Miami College of Arts and Sciences. said “We know our lives are inextricably entangled with things and the earliest archeological records show that ownership of objects is a universal phenomenon that has existed across time, cultures and people.”

Asking John about new steps forward in his work he said that he wants to work on developing his own natural inks for his artwork which adds to the whole process and project he may be working on at the time. By foraging for natural pigments which come from plants allows the artist to experiment with nature and offers an artistic inspiration to him in new ways he hasn’t experienced before.

You can catch John at the exhibition all next wknd, so come and visit the gallery on Albert Road to find out more and see the incredible work involved. 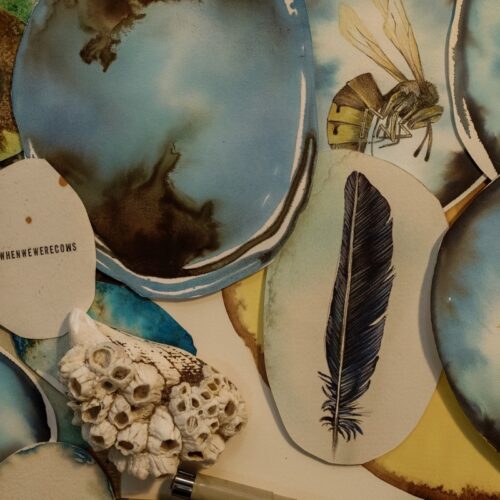 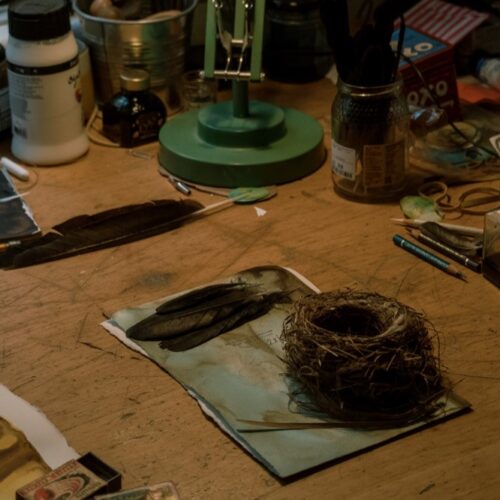 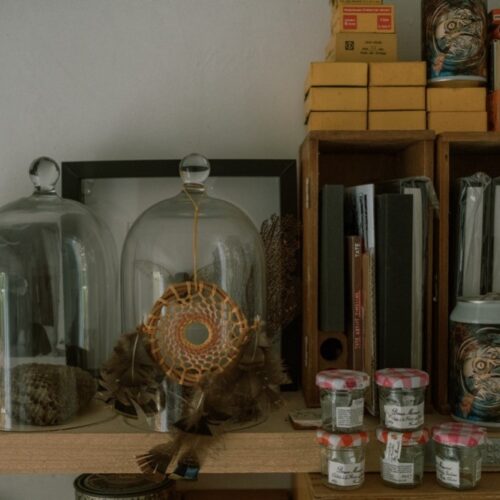 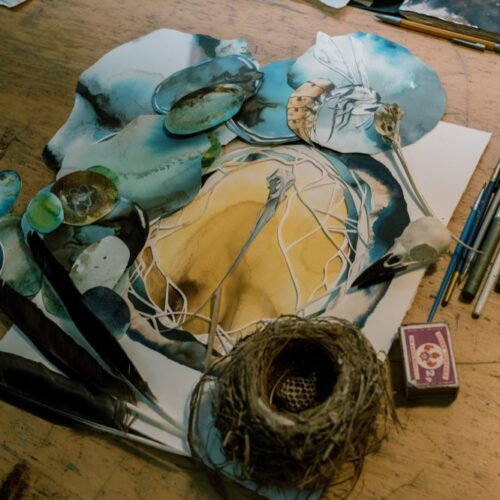 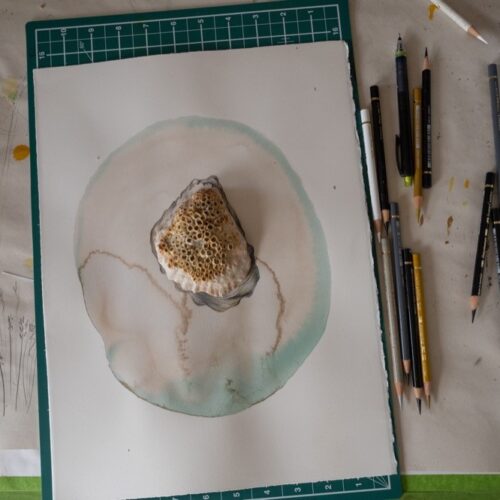 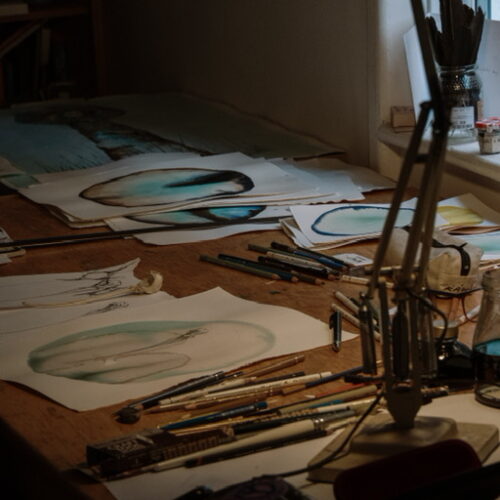